A RUBERY councillor has slammed Worcestershire County Council after Highways chiefs said the child figures he helped install outside schools to slow down traffic must be removed over safety concerns.

Council bosses say they do not meet the necessary requirements to be on a public highway but Coun McDonald refuted the claim.

He told The Standard: “These child bollards/figurines were installed because of accidents outside the schools in the area I represent and since their installation there have been no accidents.”

He said he was told the bollards had to be taken away because they did not have the right CE mark but, he argued, a CE mark was not required as they were not within the relevant category listed by the EU.

And he added in taking them away officers would be neglecting their duty of care to the children and putting them at risk. 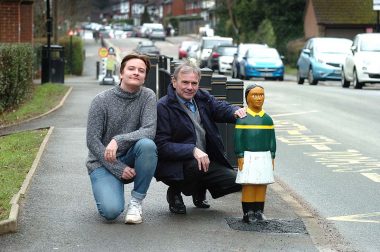 “It does beggar belief a county council that pays its top staff salaries in excess of £130,000 can be so crass as not to know the bollards/figurines do not require such a mark and furthermore do realise their importance regarding the safety of children at our school gates.

“There has never been a formal objection to these figurines only praise and support for such measures.”

He added the police had backed the scheme and even asked for figurines to be installed near more schools throughout the county.

“There are hundreds, if not thousands, of these up and down the country and Worcestershire is the only council taking this course of action.

“If the authority was correct, all the other councils would be removing theirs.”

A Worcestershire County Council spokesperson said: “The child bollards were installed as part of a pilot.

“Traffic management and road safety specialists have assessed their impact during that trial period.

“The bollards do not meet the necessary requirements to be used on a public highway.

“The county council is assessing whether the bollards can be relocated appropriately off the public highway, and if not, replaced with an approved type.“