CHILDREN from Jellybabies Nursery and Pre-School have been learning about the work of Operation Christmas Child.

Mary, a representative from the charity, came to the nursery and explained the huge difference the shoebox gifts made and the journey they went on.

Youngsters were shown pictures of children who received gifts last year and were then involved in filling the boxes with toys, games and toiletries. 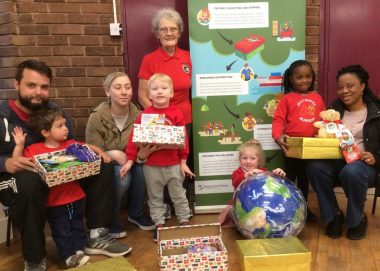 The children headed to Starbucks which supplied cups to put in the shoeboxes they are making at home as part of the project.

Mary and Elaine led action songs with the children, told them the story of a Teddy Bear who became a toy for a child in Africa and about the living conditions youngsters over there face.

And Mary and Elaine supplied craft materials so the children could make a piece of threaded art to put in their shoeboxes.

Jellybabies Manager Jacqueline Walker said: “This was a fantastic morning, and a great fun way for the children to learn about the wider world and ways in which they can make a difference to child a lot less fortunate than themselves.”