WALKING football and hockey sessions are returning to Bromsgrove this week after their Coronavirus lockdown break.

The sessions, ran by Alan Gormley, can each accommodate 24 people and so far 15 people have registered on each one.

Both sessions are at Sanders Park from 7pm to 8pm – walking football tomorrow (Wednesday) and the hockey on Thursday, July 23.

Alan said: “We will be over the far side of Sanders Park for the football – there is plenty of space there so there should be no problems with social distancing.

“This week, being the first one, is a trial session – we want to make sure the area accommodates what we want to do and ensure we are not infringing on other park users at that time.”

The guidelines set out by the Football Association will be followed for the session. 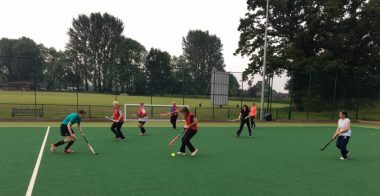 “England Hockey has issued official guidelines but not for the close-contact version of the game so Bomsgrove Hockey Club worked tirelessly to put measures in place and they worked like clockwork so I want to say a big thank you to everyone involved in that.

“Because of that we will use the same method for the walking hockey sessions.”

Alan added it would be nice to see everyone again after what had felt like a really long time.

“I am always saying to get out and take part in exercise or sport the hardest step is the one outside the front door and that is going to be true of this.

“I certainly found it difficult the first time I stepped out and the same has been said by other people I have spoken to.”

Alan is hoping more people will take that all important first step to attend the sessions.

Many of the previous players are still shielding which has led to a drop in numbers but Alan said anyone who was not self-isolating and did want to come down and give either session a go would be very welcome.

People should let Alan know as he needs to know numbers prior to the sessions.

For more on Bromsgrove’s Walking Sports and to sign up to the sessions email Alan Gormley at alan@sport-edge.co.uk or call him on 07731 369942.

After becoming the town to introduce walking hockey to the world, Bromsgrove has been vying to become a centre of excellence for walking sports.

2020 was set to be a massive year for those plans before they were scuppered by the pandemic.

Alan and his team have been working hard behind the scenes during the lockdown and plan to pick up Bromsgrove’s centre of excellence bid as and when it allows.