A TENACIOUS pupil from Chadsgrove School walked 100 laps of her garden to raise funds for the NHS after being helped after she suffered life-changing injuries in a road crash.

In 2017 when Gemma Coates was 14 she was hit by a van on a crossing in Solihull which left her with a brain injury.

She went into a coma and when she came round she was unable to walk and talk.

Birmingham Children’s Hospital has been helping her rebuild her life since the devastating incident. 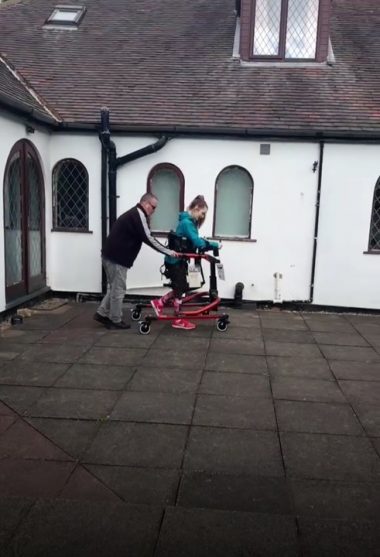 Gemma, now 17, and her sister Paige chose the charity because of the treatment and support she received.

Each day for ten days Gemma completed ten laps of her garden with the help of her dad and all her family cheering her on.

Staff at her 12US class at Chadsgrove said: “It was an amazing achievement considering everything she has been through.

“We are all so proud of her.

“Her parents and her sister are so supportive of both her and the school.”