YOUNG people from several Bromsgrove schools were given a dramatic lesson in road safety as part of the Dying2Drive scheme.

Officers from West Mercia Police’s North Worcestershire Youth Engagement Team have been supporting Hereford and Worcester Fire and Rescue Service to deliver the lessons aimed at teenagers who will soon be able to get behind the wheel.

The sessions took place at Bromsgrove’s combined police and fire station and featured a mock-up road crash, showing the dangers and impact not driving safely can have.

Presentations and workshops were also delivered by Hereford and Worcester Fire and Rescue Service, volunteers, West Mercia Police Youth Engagement team and the force’s Road Safety Team. Over the last ten years the attendance has grown significantly, which now sees around 3,000 students taking part every year across the two counties. 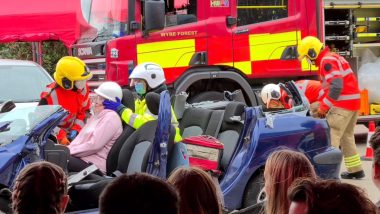 Via the interactive workshops, Dying2Drive aims to reduce the risk of death and serious injury amongst young road users as they start to travel independently in cars or on motorbikes with other young adults.

PC Neil Sharpe said: “When you turn 17, getting your driver’s licence is maybe the most amazing thing to happen to you.

“Passing your driving test and having that freedom and independence a car brings is something most of remember well.

“Of course, there are lots of distractions for young people and our aim is to make them as aware as possible of the risks that come with driving and the social life that is also part of being young.

“There is also full reconstruction of a serious road traffic collision that requires fire crews to cut out the driver, paramedics to treat the victims and the tools that they use.

“It’s a powerful session and while we want young people to enjoy their new freedoms, we need to impress upon them that the choices they make can have significant impacts on their lives, their passengers, other road users and pedestrians.

“We also focus the drink and drug testing of the drivers in the reconstruction and talk about the life-long implications that come with positive results at the roadside.

“While we don’t want to dampen the excitement in the groups, the message is a serious one to be taken seriously and one that could possibly save their life.”