YOUNGSTERS from the Sixth Bromsgrove Scouts have launched a new ‘Mucky Pups’ campaign in a bid to get more dog owners to pick up after their pets.

The children have been busy making dog poo bag dispensers which they spent a Saturday attaching to lamp posts around the village before filling them with the empty bags.

Cub scout leader Phil Lacey said: “It went really well and we have been getting some great feedback from the villagers who love the idea.” 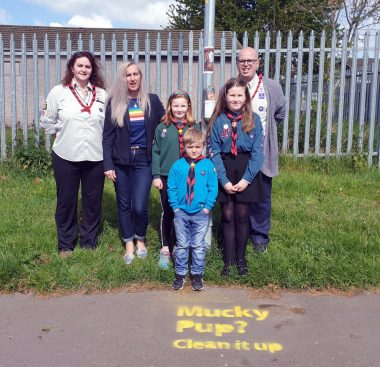 Coun Shirley Webb who also joined the campaign added: “They have done a fabulous job around the village – they worked really hard to get this set up and they were so excited to be doing something worthwhile for their community.

“Fingers crossed people use them for what they are intended.”

Coun Webb has allocated some of her divisional funds to keep the project going and she said if it was successful she did not see why other groups across the district could introduce similar schemes.

Coun Webb and Mr Lacey both hit out at vandals who destroyed some of the dispensers and the police have been informed.

The damaged ones have now been replaced and the pair pleaded with people to leave them for their intended purpose.