A ROGUE builder who conned a Northfield pensioner with dementia out of hundreds of pounds after claiming to have carried out ‘urgent roof repairs’ has been jailed.

In reality neither Thomas Connors nor or his accomplice – who police are still searching for – had not done any work on the 85-year-old man’s property.

The 62-year-old conman pleaded guilty to fraud and criminal damage offences in March 2018 and last week he was jailed for 20 months at Warwick Crown Court.

It came after the pair were captured a week earlier on a doorbell security camera at a home in Chapel Fields, Coventry, where an 89-year-old man and a 91-year-old woman lived.

The pair had again claimed they had spotted work which urgently needed doing. 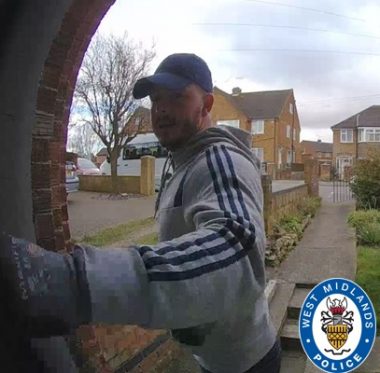 Do you know who this man is? Police want to speak to Connors’ accomplice. s

But then the accomplice is believed to have deliberately damaged tiles himself as the pair claimed more than £1,000 for the ‘emergency works’.

The elderly homeowners became suspicious and – with the distressed woman screaming for help – Connors and the other man were forced to flee with no cash. However, they left behind a £1,500 roof repair bill.

Police found out about the Northfield incident while investigating the one in Coventry, finding the conman on that occasion matched Connors’ description.

Several calls to West Midlands Police led to Connors being caught, charged and going to court but the accomplice remains at large.

PC Munmohan Sahota, from force CID, said: “Connors had no hesitation in conning those he knew were elderly and vulnerable for his own gain.

“We are indebted to the public for their help in identifying Connors and we were confident in the case we built against him.”

Now the case against Connors has been concluded, police have released the picture of his accomplice in the hope that someone will recognise him and contact officers.