A POIGNANT memorial service was held to remember a policeman who was brutally murdered more than a century ago.

Present officers from West Mercia Police gathered in the Beoley Church grounds on Thursday in memory of James Davies, laying floral tributes at his grave.

The father-of-three was killed on Saturday, February 28, 1885 by Mosses Shrimpton a well known poacher who had recently been released from the gaols.

A coroner’s inquest found James had defended himself hence the slash to his hands but ultimately died from a severed wind-pipe and cuts to the carotid artery.

Based on the evidence found Shrimpton was arrested and later sentenced to death.

He was the last person to be hanged at Worcester Gaol.

Officers, neighbours and mourners set up a memorial fund in his name to help his widow look after their three children and newborn baby, raising £1,408.

Some of the money raised was put towards the roadside memorial where the incident happened, reading: ‘JD 1885′. 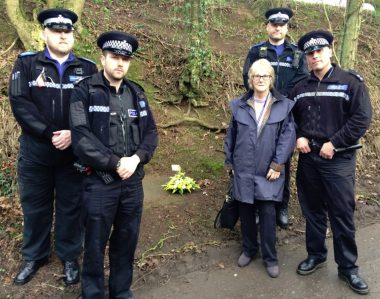 But the memorial stone had to be replaced by Redditch Police Station after it was vandalised over 20 years ago.

PC Davies’ memory has been kept alive for the last 134 years by Wythall Police who are keen to remember one of their own.

Insp Dave King said of Thursday’s service: “It was a nice service and we also laid a wreath at the roadside memorial.

“It is something we will be looking to do in the future to ensure he is never forgotten.”