A TEAM from Hereford and Worcester Fire and Rescue Service braved the elements to take on a gruelling Brecon Beacons 10 Peaks Traverse (West to East) to raise £5,140 in memory of Bromsgrove firefighter Stu Crebbin.

Stu died in March last year at the age of just 46 and was part of the team which took on the challenge for the first time.

This year – to honour him and support the Fire Fighters Charity which was close to Stu’s heart – 32 of his colleagues and his sister Sam Crebbin undertook the mammoth course in the opposite direction to last year’s which was done East to West. 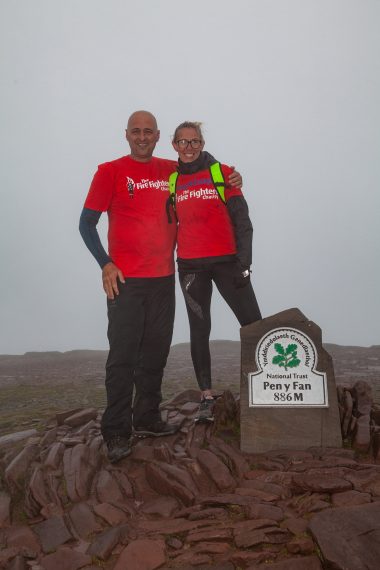 Led by Hereford firefighter Spence Jones, the team climbed the ten highest peaks in the Brecon Beacons National Park, around 42miles of mountain terrain with a 3,100metre ascent. The average 80kg person would have burnt 9,000 calories.

Spence said: “The conditions were pretty severe at times with torrential rain and gales meaning that everyone wore waterproofs all day, however all 33 participants who set off at 5am completed the event at around 11.30pm, an incredible achievement.

“It was a fantastic effort all round and I’d like to thank everyone who took part – not least the essential logistical support team.”

So far Stu’s Phoenix Challenge has raised £5,050 for the Fire Fighters Charity. But the fundraising efforts are far from over.

Six car washes are arranged for the next five weeks – five in Herefordshire and Worcestershire and one in Hartlepool where Stu was originally from.

Spence added everyone was confident they would beat last year’s £11,384 total for the cause.

“Stu’s memory will live on long into the future with annual Phoenix Challenges, the planning for next year’s event has already started.

“Stu was dedicated to raising money for the Fire Fighters Charity and the outpouring following his death from fire and rescue services and colleagues across the country was overwhelming.

“He made his mark, genuinely cared for people and stood up for what he believed so it’s only right for us to keep that legacy going.”

Sealed bids more than £5,000 are being taken for blacksmith Steven Cooper’s incredible 1.8m phoenix. People can email sjones@hwfire.org.uk to bid.

Visit www.justgiving.com/fundraising/stusphoenixchallenge to donate to the cause.