This month’s column is brought to you by Bromsgrove Extinction Rebellion (XR).

WORCESTERSHIRE County Council declared a Climate Emergency at its meeting on July 15 (joining three-quarters of other local authorities that have already done so).

The Motion was tabled by the Liberal Democrat and Labour Group. Extinction Rebellion groups across Worcestershire and the Greens have been calling on the county council to declare a Climate Emergency for two years. So now we call on the WCC to back its declaration with bold leadership and urgent action.

But the county council refuses to go any faster than the UK Government and clings to its plan to achieve carbon neutrality by 2050, rejecting calls for this target date to be brought forward to 2035.

Its plan also only covers directly-controlled activities like council buildings and transport fleet – these account for just 1.6 per cent of total carbon emissions in the county which the council can influence. 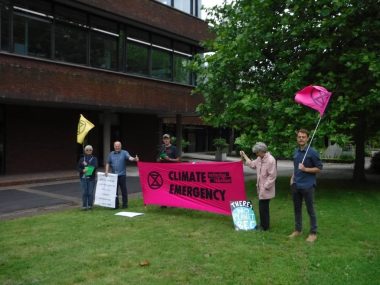 So its target is to cut emissions over 30 years whilst continuing to prioritise road-building programmes over green investment, especially in Bromsgrove.

It claims to be ‘straining every sinew’ but we say this simply lacks ambition.

Tragically, recent events have demonstrated that the Climate Emergency is not some distant threat in the future. It is right here and right now.

On the day of the county council meeting, hundreds lost their lives, homes and livelihoods in lethal flooding across western Germany and parts of France, Belgium and the Netherlands.

In the past month we’ve also seen unprecedented heatwaves across the north west Pacific of US and Canada with temperatures smashing previous records. We’ve seen terrifying pictures of commuters trapped in neck-deep water on subway trains in eastern China following torrential rain.

And here in the UK the Met Office issued its first Extreme Heat warning as Bromsgrove baked in 30 degrees. We tend to associate climate change with far-off countries like Bangladesh but the impacts are getting ever-closer to home with devastating consequences for people just like us.

All of this has long been predicted by climate scientists. We’ve always had heatwaves and flooding but there can be no serious doubt now that man-made global warming is making these events more frequent and more intense. And it’s only going to get worse. Global temperatures are currently 1.2 degrees Celsius above pre-industrial levels.

The Paris Climate Agreement aims to restrain further increases to 1.5 degrees. But without the decisive international action needed to implement that agreement, the world is currently on course for a rise of at least two degrees. The consequences of that would be truly terrifying.

Extinction Rebellion will be calling on the UK and other governments to face the truth about the Climate Emergency and take the urgent action we need NOW while there is still time to avoid the worst impacts.

If the UK government adopted a bold, ambitious approach maybe even our County Council would be shamed into following suit.

This Eco-Action column was brought to you by Extinction Rebellion Worcester and Bromsgrove Visit www.xrworcs.org.uk or facebook.com/xrbromsgrove for more.