BROMSGROVE man Ronald Gregory had a 100th birthday to remember after the community came together to give him his very own hour-long bash in the street to maintain social distancing. 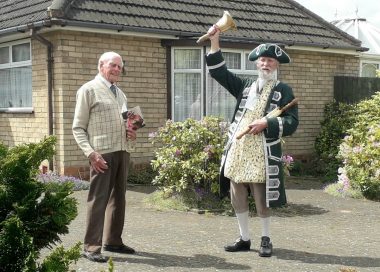 Ron with his card, a beer and Bromsgrove Town Crier Kevin Ward. Picture by Tristan Harris.

The centenarian’s celebration began with a declaration by Bromsgrove Town Crier Kevin Ward who had put together a special cry about Ron’s life.

More than 80 people gathered in Ron’s road to sing happy birthday to him and there was a live performance of wartime music by Leigh Blakeman from Vintage Class.

As well as classics, including Sunny Side of the Street, We’ll Meet Again, A Long Way to Tipperary and Pack Up Your Troubles, she also broke from the 1940s and 50s to sing a special version of his namesake song Da Doo Ron Ron. 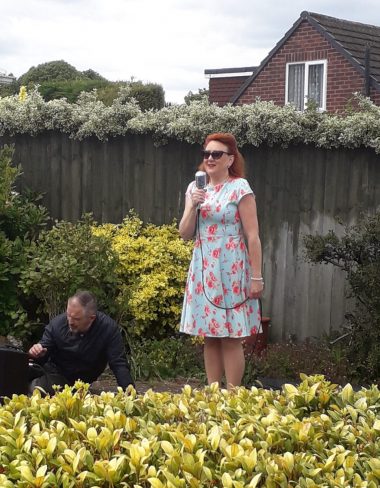 He had a Sunday lunch delivered to him, received presents and gifts and had a visit from his friends in Gloucestershire who used to see him every week before lockdown but had not been able to since March.

Delighted Ron also received the customary card from The Queen for reaching his marvellous milestone.

Raising a glass of real ale on his driveway Ron said: “This is for Her Majesty.

“I thought I was going to have a quiet birthday – this is amazing.

“I didn’t realise how many friends I had in the street – I can’t thank everyone enough.

“The postman asked me if the card was for me and was shocked when I told him it was – he said I only looked about 70.”

Ron said the hardest part of his life were the war years.

As he was in a skilled reserved occupation during the Second World War he worked at the Austin Motor Company in Longbridge, creating aeroplane parts for the war effort.

In the evenings he was a volunteer firefighter and during one raid by the Germans he helped rescue people caught up in a massive bomb blast in Birmingham, near where Bristol Street Motors is now.

After the war he also worked making tools in Redditch before the factory was moved.

In 1942 he went to ballroom dancing classes where he met Joyce Jones. They became the loves of each other’s lives and were married for 73 years before she sadly passed away.

When asked about the secret of his long life he said: “It’s about getting on with it and doing everything you have to do.”

Ron’s celebration all came about after a call to the Standard from Ron’s great niece Lorna Wint who lives on the Isle of Man.

She was concerned there would not be much of a celebration because of the lockdown and called the paper to find out if it would be possible to get Ron a Sunday lunch delivered locally.

Feeling more besides the Sunday lunch could be put together we called Jules Evans from the Bromsgrove Royal British Legion and organiser of last week’s VE Day 75 extravaganza.

Within hours, as well as a home-made Sunday lunch from the Franklin family, Vintage Class’ singing talents were enlisted, a cake was organised by Courtney’s Cupcakes in Catshill and Crier Kevin was summonsed to put together his special cry.

Martin Connellan the Bromsgrove Cobbler agreed to be a drop-off point for cards and engraved a special gift for Ron. 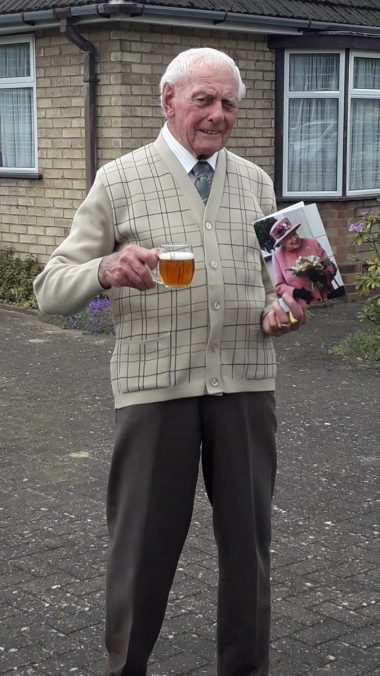 Jules said: “As soon as the Standard alerted me I knew this gentleman’s birthday could not go unmarked.

“Not many people reach this age and I was thrilled to be involved.

“It was a real community effort – I knew as soon as I was told about it people would come forward and it has been a great day for him.”

Sally Franklin made Ron his Sunday lunch after responding to a Facebook post from Jules ‘within two minutes’.

She said: “I jumped at the chance – not many people get the chance to cook for a 100-year-old so I just had to do it.

“To look around here and see everyone is wonderful – what a fantastic community we have here in Bromsgrove.”

She also made him a commemorative plaque featuring all the things he enjoys.

Ron’s niece Sue said: “I thought it was brilliant – we wanted to do so much originally but wasn’t possible because of the lockdown.”

Lorna said: “I’ve am blown away by it all – I’m absolutely speechless.

“This is better than I could have ever dreamed of – thank you ever so much to the Standard, Jules and everyone who got involved.

“I couldn’t sleep last night – it was like when I was younger on Christmas Eve.

“I can’t believe what you have all achieved and organised in less than three days.”