Calls for Charford play area to be repaired and reopened

CALLS have been made for a play area in Charford which was shut because of vandalism two years ago to be repaired and reopened.

Residents say the neglect of Tibberton Court, owned by Bromsgrove District Housing Trust, has led to it becoming a magnet for drinking, drug-taking and anti-social behaviour.

Youths access the area through a broken fence and their unruly actions are making people’s lives a misery.

Hypodermic needles have been found on the play area and cannabis smoking is rife. 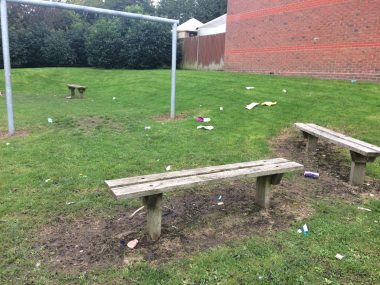 Jennie Peplow, who lives nearby, said: “Something needs to be done to keep those out who vandalise it.

“It has been left for so long that, looking in, there is nothing worth playing on.

“Families with young children have not had the opportunity to use it and some older children who could have used it are now getting too old.

“It should not be left as a place for people to drink and take drugs – and for yobs to play around in in the evening, keeping people awake.”

Coun Michael Thompson has contacted BDHT to ask them to restore the play area to its former glory and he has also spoken to the district council’s crime co-ordinator David Rischmiller to see what could be done.

“A lot of what I have focused on since becoming a councillor in Charford is to reduce anti-social behaviour and to provide good places for young families to go.

“Here we have a neglected playground that young families have been robbed of.”

Graeme Anderson, director of housing and communities at bdht, said: “We have already been liaising with Michael Thompson about this play area and we have made a commitment to have a plan in place by the end of November, which we have communicated to him and we will honour.

“Whilst we haven’t received any reports of anti-social behaviour or drug use at this site, we have arranged to repair the fence this week to prevent people from gaining access.”

Bromsgrove Community Safety Projects Officer Mr Rischmiller said he visited the area and had passed his observations onto BDHT.

“We continually actively engage with partners including elected representatives, housing providers, police and landowners to identify issues where we can support actions to promote community safety.”