The members of Mercian Fitness and Walking Group, led by Bromsgrove’s Ian Northcott, took seven days to complete their trek, taking the Machame route to adapt to the altitude before heading to the summit.

The climb began in the rainforest and moorland regions of the lower slopes of the mountain, before heading to Lava Tower on day three. 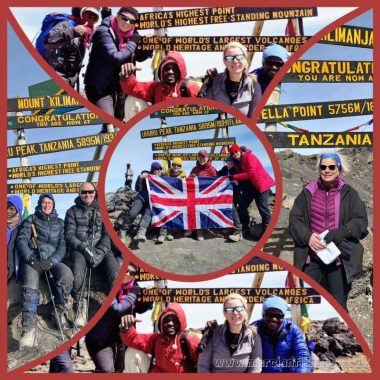 The altitude at this point, around 4,600m began to affect certain members of the group, but they were determined to keep pushing on to finish the expedition.

Day four saw the most brutal test yet, as the climbers took on the Barraco Wall. This involved scrambling up a steep rock face with a 300m vertical climb.

Despite having a year’s training for this expedition, it was at this point many of the climbers began to understand the scale of the task in hand.

After a well-deserved rest at base camp, sitting at around 4,700m of altitude, the climbers set off at 10pm for their final push to the summit.

For everyone involved the climb was worth all of the toil of the journey with spectacular views over the sunrise of Tanzania.

The 5,895m climb was very emotional for everyone involved and the successful climbers thought of the two hikers who had to abandon the expedition due to health conditions.

A long descent from the mountain and hike to the edge of the national park followed and the expedition was deemed a success.

The members believed they showed what could be achieved if you ‘challenge your limits and do not limit your challenges’.

Ian said: “I have taken part in some tough things in my life and this was up there as one of the hardest things I have ever done.”

The group hopes their success will inspire others to join Mercian Fitness with more expeditions planned in the future.

Visit mercianfitness.co.uk for fitness and merciannordicwalking.co.uk for the Nordic walking page.