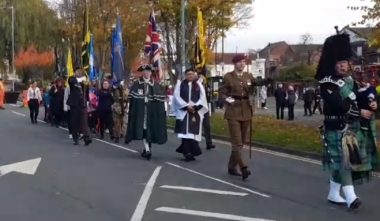 Amazingly it was right in front of where four firefighters were stood whilst waiting to salute the parade as it passed.

They leapt into action to extinguish the flames while the rest of the procession walked around it.

Firefighter Phil Blacker told the Standard: “If it was going to happen, what better place for it to happen than right in front of our engine with a crew already there.”

The parade itself was led by a former West Mercia Police Chief Constable and Piper Paddy McGowan, followed by standards from a variety of military organisations, along with the Girl Guides, Rainbows, Scouts and representatives from a host of other groups.

At the War Monument the crowds swelled – bigger than ever before – especially after last year’s scaled back commemorations during the Covid-19 pandemic. 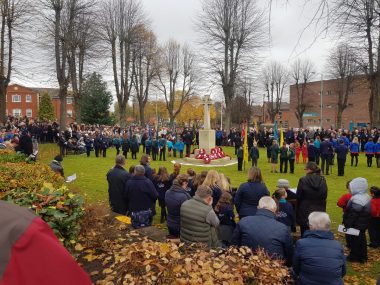 People were almost watching from the bus station, such was the impressive turn-out.

The service was led by Rev Ray Khan, vicar of St John’s Church and the Bromsgrove Royal British Legion chaplain, who also played the bugle.

The Exhortation led into an impeccably-marked two-minute silence, followed by the Kohima Epitatph and the laying of more than 35 wreaths.

Bromsgrove Royal British Legion chairman Patrick Smith said: “This town is unbelievable – to see that many come down was amazing – the people of Bromsgrove have yet again shown tremendous support to the Armed Forces and to remember all those who lost their lives.

“If these turn-outs keep growing, we’re going to need a bigger parade ground.

“Also, I think that must be the first time in military parade history that a motorbike or any other vehicle has caught fire.”

Afterwards, a short service was held at St John’s Church where wreaths were laid to remember all those who died in the First World War and the Boer War. 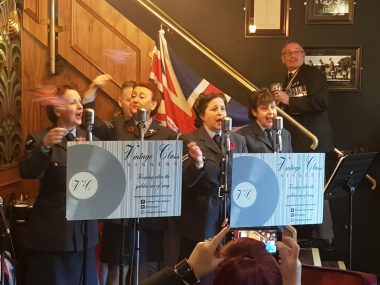 They belted out a number of classics, including There’ll Always Be An England, Land of Hope and Glory and Rule Britannia.

The event also featured an auction to raise funds for the Royal British Legion.