Bromsgrove postie hangs up his bag after 24 years

TRIBUTES have been paid to a popular postman who has retired from his Bromsgrove round after 24 years.

Colin Swift delivered his last letters in Blackmore Lane on October 9 and was surprised to get some envelopes back in return to thank him for his service of almost two-and-a-half decades. 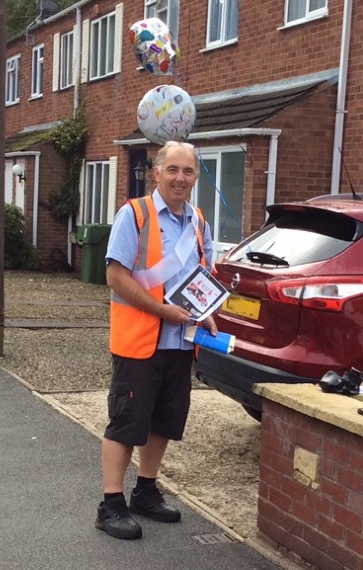 Resident Frank Fallon said: “When I found out he was leaving I put a note through the 16 doors in the lane asking if people wanted to give him something to say thank you.

“I received 12 envelopes back for him and then – to make sure he called at my house on his last day – I posted myself a letter first class the day before.

“When he arrived I gave him the neighbours’ envelopes and he was flabbergasted – he said he could not believe he was so popular after delivering all those bills, speeding tickets and parking fines for the past 24 years.

“Everybody hopes – after all his hard work – he has a very happy retirement.”