Bromsgrove MP 'could not accept the conditions' of staying as chancellor

BROMSGROVE MP Sajid Javid told Prime Minister Boris Johnson in his resignation letter he ‘could not accept the conditions attached to his reappointment’.

He added: “It is crucial for the effectiveness of government that you have people around you who can give you clear and candid advice, as I have always sought to do.

“I also believe that it is important as leaders to have trusted teams that reflect the character and integrity that you would wish to be associated with.”

He said the government Mr Johnson led had an enormous opportunity in the coming years to ‘transform our country’.

“Millions of people have given their renewed trust in a Conservative government to move on from the divisions and distraction of recent years and lead us forward into a decade of renewal.

“We must not waste a moment in delivering that promise.”

He said he had supported the agenda which had been developed over the last seven months, from maintaining strong public finances, investing in infrastructure, protecting our environment, recruiting 20,000 police officers and boosting housing and skills so the next generation could have the opportunities they deserved.

He urged the PM to ensure the Treasury as an institution retained as much credibility as possible, adding the team there had impressed him with the energy and intellect they had brought to delivering the policy shifts he had led.

He said they were ‘among the best public services we have’ and hoped they could continue to play a central role in driving an economic agenda which put people and place at its heart.

“My biggest hope is that this government will bring the country together and help level the playing field so that stories like mine are not exceptional or lucky.” 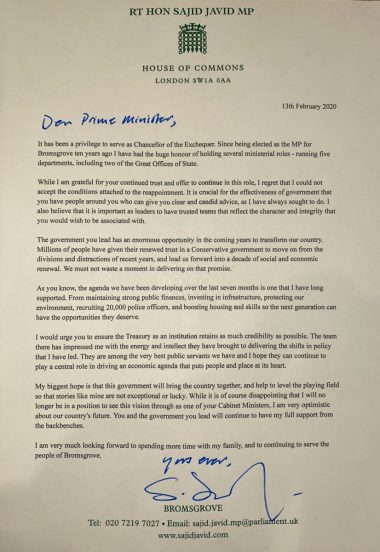 He said whilst it was disappointing not to be able to be in a position to see this vision through as one of Mr Johnson’s cabinet members, he was optimistic about the future.

He said Mr Johnson and the government would continue to have his full support from the backbenches, adding he was very much looking forward to spending more time with his family and continuing to serve the people of Bromsgrove.

Earlier in a tweet Mr Javid also wished his successor Rishi Sunak, the MP for Richmond in Yorkshire, the very best, calling him a ‘good friend’ and ‘one of the most capable ministers he had the pleasure to work with’.

The news of Mr Javid’s departure broke this morning and came less than a month before he was due to announce his first budget.

Mr Javid was one of the first to be appointed during Prime Minister Boris Johnson’s cabinet reshuffle last July and looked to hold onto the position in today’s move around.

But reports suggest there were tensions between Mr Javid, the PM and his advisor Dominic Cummings after he as asked to sack his team of special advisors and he resigned rather than obey that request.

Prior to being Chancellor, Mr Javid had a 15-month spell as Home Secretary.

Since being elected to Bromsgrove a decade ago he has increased his majority at each subsequent election.