Bromsgrove composer receives prestigious award from the Archbishop of Canterbury

A BROMSGROVE composer who has written more than 20 Christian musicals has won the prestigious Thomas Cranmer Award for Worship.

Roger Jones, who is also an author and speaker, was presented with the accolade by the Archbishop of Canterbury Justin Welby at Lambeth Palace in recognition of more than 40 years working as a composer, evangelist, worship leader and speaker.

Roger studied music at the Birmingham School of Music (now Birmingham Conservatoire) and went on to become Head of Music at Aston Manor School in inner-city Birmingham.

After a few years he felt the need to write music for his school choir which was suitable for the students in terms of age and ability. 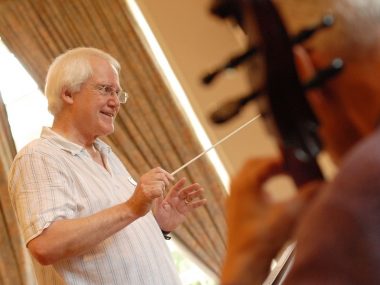 His first work was the Easter musical, ‘Jerusalem Joy’ which was featured on BBC Songs of Praise in the mid-1970s and has since been performed around the world.

Some of his best-known works include ‘Saints Alive’, ‘While Shepherds Watched’ and ‘From Pharaoh to Freedom’.

Roger said: “I was utterly speechless when I was told of the award. It is an incredible honour.

“Over the years it has been a joy to write music for the ordinary folk in the pew – music they can use to share the wonderful story of Jesus with their friends and neighbours.

“I also feel it is important to say that this award is also for the team around me; family, friends and colleagues who have been tireless in their support and love.” 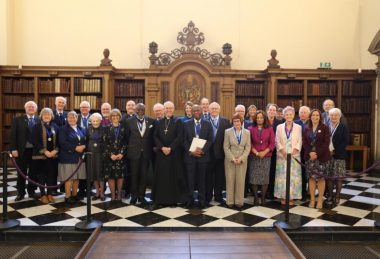 He added he was delighted to be able to take his wife Mary and son Tim, now a partner in the ministry, to London to receive the award.”

The Cranmer Award for Worship was first awarded by Archbishop Justin Welby in March 2016 to recognise outstanding contributions to all aspects of worship in the Church, including both words and music.

It is named after Thomas Cranmer, Archbishop of Canterbury from 1533 to 1555, who wrote the Book of Common Prayer.

Roger has always ensured his music was accessible by the local church and did not complicated forces or hi-tech equipment to perform.

The licensed Reader in his Diocese was described at the Spring Harvest national teaching and workshop event as ‘one of the Church’s game-changers’.