A BRAVE Wychbold youngster who was born with multiple heart defects has won a prestigious British Heart Foundation accolade.

The four-year-old had a dramatic start to her life having a cardiac arrest at just two days old whilst at her home in January 2016. 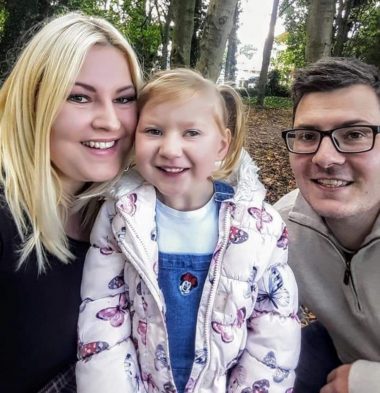 Her mum Chantelle, 33, said: “Sophia’s lips and fists had gone purple and she was making strange squeaking noises.

“We became concerned and rang 999. Within a few hours of being home, Sophia had a sudden cardiac arrest in her dad’s arms.

“At this point, I was hysterical and convinced we were going to lose Sophia.”

Paramedics carried out CPR and rushed Sophia to Worcestershire Royal Hospital, where medics worked tirelessly to save her life.

They saved Sophia but Chantelle and husband Sam then received the news that Sophia likely had a problem with her heart.

She was transferred to Birmingham Children’s Hospital where she was put on life support.

Doctors discovered Sophia had various heart defects (all types of congenital heart disease) which means the defects developed whilst she was in the womb.

Sophia underwent surgery at just five days old, and two days later she was taken off life support as she was miraculously able to breathe without it.

She was discharged after nine weeks, but has returned to hospital over the years for five different surgeries.

In total, medics have discovered that Sophia has 11 defects in her heart.

But Sophia has never let her condition hold her back and, along with her family, she works closely with the Worcestershire Heart Fund-raising Group to raise funds for the British Heart Foundation.

Sophia has also helped promote the annual BHF Worcester Hearty Walk and last year she overcame the odds to take part in the event.

This was despite Chantelle and Sam being told that Sophia might never walk due to a defect in her spine. 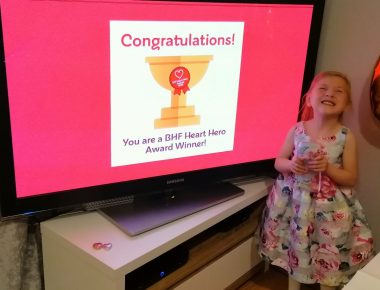 Chantelle added: “Sophia is such a headstrong, determined little girl.

“We are so proud of Sophia and amazed at how well she copes with the daily battles of her heart condition, along with her many other life-threatening illnesses.

“Sophia is our sunshine during our darkest moments and she inspires us to be the best we can be for her.”

Sophia’s dedication resulted in her scooping the award, announced by the BHF’s new ambassador, TV and radio presenter, Yinka Bokinni.

Chantelle added Sophia was so excited to win the award.

“She squealed and whooped when she heard the news.

“It really is a wonderful achievement for Sophia winning and it’s lovely to know her fundraising and raising awareness of congenital heart disease has been recognised in such a special way.

“We are forever grateful to the BHF’s research for helping our precious child live her life to the fullest.”

The night showcased inspiring people who have shown courage, resilience, compassion and bravery in the face of adversity, and included appearances from celebrity guests including Ella Henderson, The Kooks singer Luke Pritchard and actress Gemma Atkinson.

Dr Charmaine Griffiths, Chief Executive at the BHF said: “Whilst this year’s Heart Hero Awards were virtual, we enjoyed celebrating the brilliant and inspirational people who have undergone life altering experiences or have changed the lives of others.

“A huge thank you and congratulations to all of the nominees and winners, judges and presenters, as well as our new celebrity ambassadors for making the Heart Hero Awards the unique and heart-warming event that it is.”

This year’s Heart Hero Awards were supported by Laerdal Medical, who are working with the BHF to help save more lives and beat heartbreak forever.