THE HEROIC efforts of emergency service staff from Frankley and Rubery have been recognised at the West Midlands Ambulance Service Awards, writes Annie Lucas.

Paramedic Daniel Knight and student paramedic Thomas Coffey, both based at Hollymoor, attended a house fire in Birmingham and treated a patient who had escaped a burning building.

They were then told there was another patient inside so, despite the house being filled with smoke, Daniel and Thomas went in and performed a ‘snatch rescue’ of the patient, who was unable to move because of his injuries.

Both patients then received treatment they needed from ambulance staff and were transported to hospital.

Daniel and Thomas were handed a well-deserved Chief Officer’s Commendation.

Kevin Naylor and Gavin Taylor from the Patient Transport Service in Frankley and Jason Wiles, a lead paramedic based in Brierley Hill also received a Chief Officer’s Commendation for rescuing a lady from a bridge over a dual carriageway. 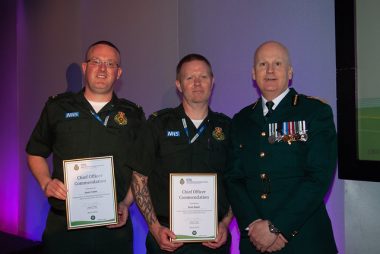 Kevin and Gavin were on their way to pick up a patient when they noticed a woman on the wrong side of bridge railings, looking down at the traffic below.

Fearing she was going to jump they quickly turned around, parked up and slowly approached her, talking to her from afar.

They tried to reassure her but got no response.

Jason happened to be passing and stopped to offer help and the three moved closer to the woman who still refused to speak and started to lean forward.

At that point, Kevin and Jason managed to grab her arms and body and pulled her back to safety.

The citation for their award read: “This truly was a heart stopping moment for all concerned, but thanks to their bravery, the lady was brought to safety and transported to hospital.”

All the awardees were honoured at the ambulance trust’s ceremony at the Copthorne Hotel.