2018 HAS been another busy and memorable year across the district and the Bromsgrove Standard has been there to bring you all the biggest stories first, both in print and via our websites.

Olympic gold medallist Rebecca Adlington officially opened the new Bromsgrove Community Leisure Centre in January, labelling it one of the best she had ever seen. There was controversy though when plans to build a new sports hall on site were thrown out by the district council in July.

A new Youth and Community Hub was officially opened in the basement of Bromsgrove Baptist Church in July to give the town’s young people a place to hang out and to access vital services.

Bromsgrove MP Sajid Javid became Home Secretary in April and hit the headlines in July for granting the UK’s first ever permanent licence for cannabis-based medicines to help Alfie Dingley who suffers with severe epilepsy.

We have helped highlight a number of issues and campaigns in the last 12 months, including illegal and dangerous parking outside schools in Bromsgrove district. Read the full story here – https://bromsgrovestandard.co.uk/news/send-us-pictures-of-illegal-and-dangerous-parking-outside-schools-ask-bromsgrove-and-rubery-police/

We also highlighted lawless off-road bike riders blighting the Lickey Hills. A shocking video emerged of a dog walker being verbally abused at the beauty spot and been coated in mud by one of the riders deliberately spinning his back wheel – https://bromsgrovestandard.co.uk/news/rubery-residents-plead-with-police-to-catch-off-road-motorbike-riders-causing-havoc/

There was good news for rail users when electric trains finally started to serve Bromsgrove. It was due to happen in May but (as often is the case with trains) it was delayed until July. That meant Bromsgrove was then served by four trains-an-hour to Birmingham, instead of just one. There was some controversy, however, when the Cross Country Trains heading to Cheltenham were removed from calling at the station. The Cross Country Line was up for consultation and Bromsgrove rail users were urged to have their say.

Bromsgrove has seen the arrival of several new shops, including a second Aldi, Lidl, Home Bargains and The Food Warehouse.

Restaurant Prezzo shut its doors, which many people attributed to Bromsgrove having a large number of high quality independent restaurants.

The arrival of new independent businesses prompted the district council in August to enter Bromsgrove into the Great British High Street of the Year competition but the town missed out.

There has been controversy as well when McDonald’s submitted plans in January for a drive-thru restaurant on land between Birmingham Road and Stourbridge Road. A public meeting attracted 80 residents and the fast food giant has now amended its plans and resubmitted them to the district council.

This summer’s tournament in Russia brought joy across the district and country with mass celebrations as England reached the semi-final, only to be knocked out by Croatia. There were calls for Sanders Park to have a big screen put up if Gareth Southgate’s Three Lions made the final. The request was turned down by the council – https://bromsgrovestandard.co.uk/news/fans-call-on-council-to-put-a-big-screen-in-sanders-park-if-england-make-the-world-cup-final/

There was so much going on throughout the district for the centenary of the end of the First World War and we brought you pages and pages of coverage, both in the paper and online. Memorable moments included the poignant services in Bromsgrove, Rubery, Catshill, Aston Fields and other areas and the breath-taking poppy cascade on the wall of Bromsgrove Methodist Centre. 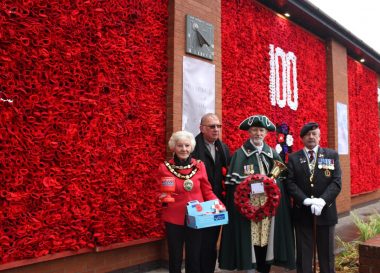 There have also been some sad stories to cover too.

In Bromsgrove, the whole community came together following the death of student Thomas Jones in September. Tom went missing during Freshers’ Week at Worcester University where he had started a course. His body was found a week later in the River Severn. Moving vigils were held for Tom, along with a charity football match at Bromsgrove Sporting, the team he played for when he was younger. Hundreds turned out to Redditch Crematorium to remember him at his funeral – https://bromsgrovestandard.co.uk/news/he-was-an-inspiration-hundreds-turn-out-for-thomas-jones-funeral/

The town was also moved by the death of popular Kelly Godfrey in May. Kelly ran the popular ‘Happy Bunch’ flower stall outside Bromsgrove’s Miller and Carter pub. More than 250 people attended Kelly’s funeral to pay their last respects – https://bromsgrovestandard.co.uk/news/more-than-250-people-turn-out-to-bid-a-fond-farewell-to-the-flower-lady-of-bromsgrove-kelly-godfrey/

In June brave Cofton Hackett mum Katy Dawson passed away after a two-and-a-half-year battle with breast cancer. Katy had travelled to and from Germany in a bid to beat the disease, using a treatment not available in the UK but she lost her fight against the aggressive form of the disease – https://bromsgrovestandard.co.uk/news/tributes-paid-to-inspirational-cofton-hackett-mum-katy-dawson-who-lost-her-brave-cancer-battle/

We are proud to have brought you all the news, sport and local events we have printed throughout 2018, weekly in the paper and daily online.

Our websites have reached new heights again this year with almost 3million page views on the Bromsgrove Standard site.

See you in the new year

We will be back in 2019 to bring you all the biggest stories first and the best coverage of local events.

We would like to wish a happy new year to all our readers and advertisers and thank them for their support and interest.