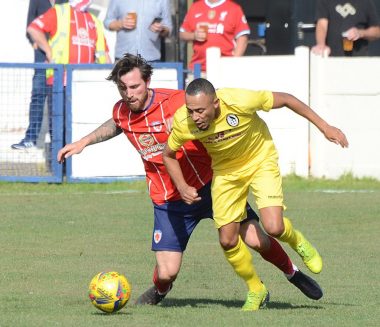 Jack Wilson, left, will remain the current longest-serving Sporting player after signing on for next season. Picture by Marcus Mingins.

BRENDAN Kelly continues to shape his Bromsgrove Sporting squad for the forthcoming 2021/22 campaign by securing the services of more players.

The Rouslers have this week tied down full-back Jack Wilson, who has made the most appearances for the club out of the current crop, and centre back Luke Ward for the new term, a week after midfielder Nathan Hayward and defender Liam Spink followed suit.

To date, eight of the existing squad have committed themselves to the Victoria Ground side, while midfielder Jack Hallahan, defender Jimmy Mutton and goalkeeper Jono Brown are the three new faces to have joined so far, during a summer in which Kelly has promised a big rebuild.

One man who will not be featuring next season is midfielder Chris Lait, who has mutually agreed to depart the Southern League Premier Central club, days after Mikey Taylor left to join division rivals Tamworth.