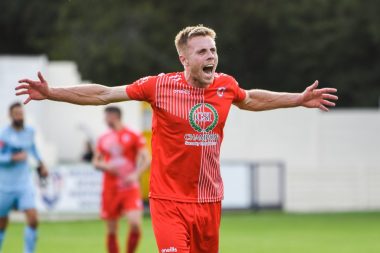 A STEADFAST approach will be required for Bromsgrove Sporting’s FA Cup bout with Loughborough University this weekend, according to midfielder Nathan Hayward.

Playing his part in the Rouslers’ 1-1 draw at Stourbridge on Monday, where Demetri Brown’s well-taken finish cancelled out a first-half opener from former Sporting favourite Jason Cowley, Hayward is of the belief that victory in the first qualifying round on Saturday could kickstart a Bromsgrove run deep into the competition.

“The one thing we’ve been missing at Bromsgrove is a cup run, it’d be great for the club, the fans and everyone involved,” said the 29-year-old.

“We can’t take Loughborough lightly, because it’s the FA Cup and regardless of what team we play they’ll be up for it like it’s the final.

“If we apply ourselves like we did in that second half, and as we did in the previous two games, I believe we’ll get the win and see ourselves into the next round.” 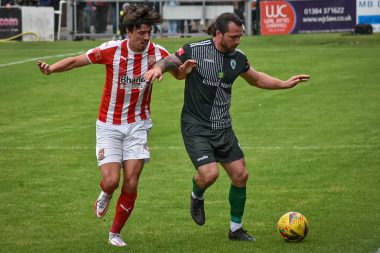 A stalemate at the War Memorial Athletic Ground followed a 2-1 victory over AFC Rushden & Diamonds two days prior – where first-half goals from Will Shorrock and Brown earned victory despite Lorrell Phillips-Smith’s late consolation.

It means Bromsgrove are now three matches unbeaten having lost their opening two fixtures handsomely, but Hayward strongly believes that the Rouslers should have made it three successive wins last time out.

“It felt more like a loss than a draw because of the way we played in the second half, but then again it’s a result of a poor first half – we were lethargic and didn’t get going whatsoever,” he added.

“That’s what happens in this league against teams like Stourbridge, they seemed more up for it than what we did in the opening half.

“We showed great character in the second half and got the goal back before absolutely peppering them. We take the positives from it, and we’ll see at the end of the season whether it’s a good or a bad draw.”