A HOME clash with Stratford Town will mark the start of Bromsgrove Sporting’s FA Cup journey later this month, ahead of the start of the new campaign this weekend. 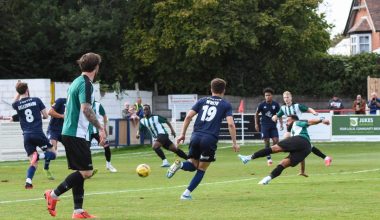 While only 600 fans are permitted to enter the Victoria Ground, as opposed to the four-figure attendances that the club are used to hosting, it will no doubt be a welcome return to the lucky few that do witness the Coalville clash.

And with a date of Tuesday, September 22 now set in the diaries of the Sporting faithful for Bromsgrove’s FA Cup first qualifying round meeting with Stratford Town, the excitement can now finally start to build as a new season begins to dawn.

Brendan Kelly’s men enjoyed a fruitful pre-season in preparation for the long campaign that lies ahead, holding an unbeaten record in all seven of their warm-ups prior to Saturday’s 4-3 defeat to Kidderminster Harriers. 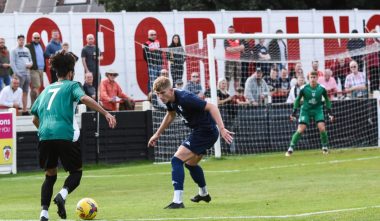 The National League North side edged the seven-goal thriller on paper, but there was enough to suggest that it could have gone the other way based on Bromsgrove’s second-half showing.

A quickfire double from Harriers’ Jaiden White and Ethan Freemantle put the visitors on the frontfoot early on, before new boy Aram Soleman – a recent arrival from Step Two side Guiseley – reduced the deficit 12 minutes in.

Kidderminster refused to weaken their grip of the game however, and extended their lead further, courtesy of Freemantle’s bursting run through the hosts’ defence and finish to match past Daniel Platt.

Portuguese youngster Miro Pais pulled one back for the hosts just before the break to cap off an enthralling first half, burying the ball in the corner after Chris Lait’s initial cross had to be cleared off the line. 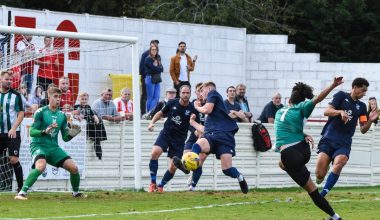 Miro Pais pulls one back for Sporting. Picture by Richard Bowcott Event Photography.

While Pais had another opportunity to find the net, he was unable to apply the clinical touch needed when firing wide of the mark.

Charlie Dowd was next to threaten around the hour mark and perhaps should have done better when blasting straight at Tom Palmer in between the Kidderminster sticks.

The missed opportunities ultimately proved costly, as Kidderminster regained their two-goal cushion through from White’s tap in from an Amari Morgan-Smith centre.

It was not enough to restore parity though, despite last-gasp efforts from Josh Quaynor and Tom Taylor, as Sporting’s unbeaten run finally came to an end.

Tickets for this weekend’s league fixture are available on a first-come, first-served basis and can be purchased on the day at £12 for adults, £9 seniors, £6 under-18s and £2 for under-12s.