Sporting must keep going to the end, says Kelly after late rally 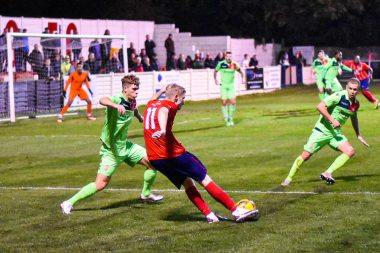 IT WAS a question of what could have been for Bromsgrove Sporting on Tuesday night after letting a two-goal lead slip in stoppage time to draw 2-2 against Tamworth.

The Rouslers looked good value to take all three points against one of the expected Southern League Premier Central front-runners after two goals in three minutes from the returning Jason Cowley and Mikey Taylor put the Victoria Ground hosts in good stead.

But ex-Sporting man Shaquille McDonald was keen to enact heartache on his former employers – striking in the 90th minute before levelling four minutes later.

For manager Brendan Kelly, it was another example of the hard yards that his side must continue to put in to rectify the recurring mistakes that have haunted them so far at the beginning of this campaign.

“It was a great game, there was nothing much between the teams,” he said. 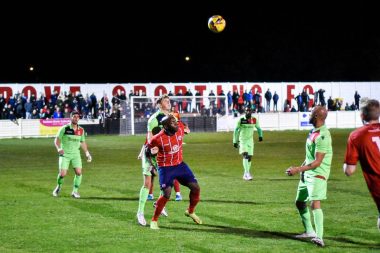 Mikey Taylor readies himself for an aerial challenge. Picture by Chris Jepson.

“They’ll probably feel they deserve a draw because of the chances they created, but obviously overall we’re disappointed because you’re two up at home and you expect to see it out.

“It’s our decision-making, maybe we’re over-eager and showing too much naivety, so we’ll work on it, but you can’t fault the lads’ endeavour and effort. For 90 minutes we were winning 2-0, but you’ve got to go to the 94th, 95th minute as you can see.

“Everyone’s upped their game since he [Cowley] came in. For the first 45 minutes I thought we were excellent, second half I don’t think we got a hold of the game.

“They’re two down and piling bodies forward, they moved the ball well, created chances and we just couldn’t hold on.”

Club legend Cowley made a dream start in his first appearance back in the red and navy of Bromsgrove since May 2019 – netting a curling effort from the edge of the penalty area in the 14th minute.

While Nathan Hayward saw his header cleared off the line moments later, Taylor was on hand to thump home Charlie Dowd’s cross with his head on 17 minutes. 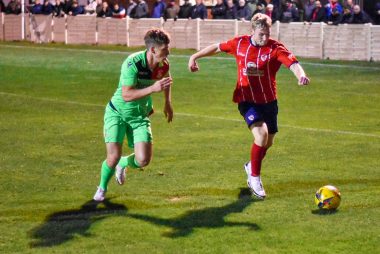 Chances were plentiful throughout for both sides, with McDonald giving Sporting a warning of his threat when forcing Daniel Platt into an excellent save in a one-on-one situation later in the first half.

A lack of clinical finishing may have led many to believe further goals were not on the agenda, until two pieces of quality in stoppage time turned the contest on its head.

First, McDonald finished well after good work from his team-mates, before meeting a free kick with his head to find the net and stun the majority of the 600 sell-out crowd.

Bromsgrove aim to pick themselves up from their midweek disappointment in a home game against AFC Rushden & Diamonds on Saturday (3pm).