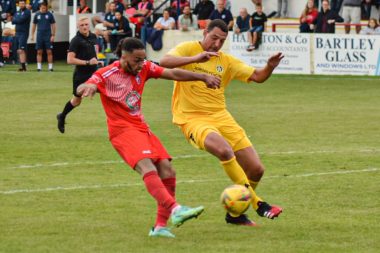 BACK-TO-BACK defeats have dampened Bromsgrove Sporting’s start to the new season, as a 3-0 away defeat to Alvechurch on Tuesday night followed a 4-0 opening-day humbling by Leiston.

It is far from the ideal introduction to the new Southern League Premier Central season for manager Brendan Kelly, who has overseen a drastic turnaround in playing personnel following an early-summer exodus, with a raft of new signings failing to make the desired impact to date.

In the midweek loss, it was one of those departing faces in Charlie Dowd who netted the opener on 24 minutes, while former Leamington forward Danny Waldron netted a second-half brace – a close-range header and a last-gasp penalty – to down the Rouslers at Lye Meadow.

And on Saturday, a 3-0 deficit by the half-time whistle spelt misery for the Victoria Ground hosts.

William Davies then increased Sporting’s misery on 23 minutes, bundling his way through Bromsgrove’s rearguard before firing through the legs of the hosts’ custodian.

Then, ten minutes before the break, an Onodi save to deny Finlay Barnes put the ball on a plate for George Quantrell to lash home the third.

While Bromsgrove forced more openings after the break, notably hitting the post through Nehemia Zazi, Davies rubbed further salt in the wound with a 25-yard rocket that zipped into the corner to wrap up his brace.

On Saturday, Bromsgrove go to Needham Market – who took their first point of the season in a 1-1 draw with St Ives Town in midweek.