Sporting back on the winning trail after Spink wins the day 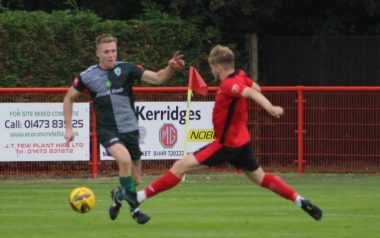 Nathan Hayward, left, goes in for a challenge. Picture by Phil Baker.

A FIRST WIN of the Southern League Premier Central season at the third attempt gave Bromsgrove Sporting fans reason to be cheerful last weekend, following a 1-0 away success at Needham Market.

Liam Spink’s header just after the half-hour mark was enough to tip the scoreline in favour of the visiting Rouslers at Bloomfields, providing Brendan Kelly and Co. a huge sigh of relief having come under the cosh in their opening defeats to Alvechurch and Leiston.

The upturn in performance was clear for all to see in Suffolk, with Sporting showing plenty of grit and determination to come through one of the tougher away days that they will experience this campaign.

It was an encounter of utmost importance for not just Bromsgrove, but also Needham Market, taking into account the winless starts that both sides had made prior to kick-off.

And this was most apparent in the way that both sides approaching the opening quarter of the game, opting for cautious approaches in an attempt to edge their way into the contest.

While the hosts had the first attempt of the afternoon to test Aston Villa loanee and Sporting shot-stopper Akos Onodi, it was the Rouslers who made the all-important breakthrough.

Having found a yard of space, Jourdain Masidi whipped in a tempting cross that Spink cleverly flicked up and over Marketmen ‘keeper Marcus Garnham into the bottom corner of the net.

Though Needham Market were handed golden openings, neither Luke Ingram or Kyle Hammond were able to provide the composure needed to find the levelling goal before the break.

That forward-thinking approach from the home side continued after the interval, but again Onodi was in no mood to be complimentary to Needham Market, keeping out a further attempt from Hammond with his legs.

Will Shorrock had the best opportunity to put the game out of sight for Bromsgrove with a shot that inched past the post, but it ultimately did not prove fatal as the last blast of the referee’s whistle gave Sporting some reprieve at last.

The club also discovered their FA Cup first qualifying round opponents in midweek, having been drawn to face Loughborough Students at the Victoria Ground, in a tie that will take place on Saturday, September 4.