Rouslers in fine form for opener 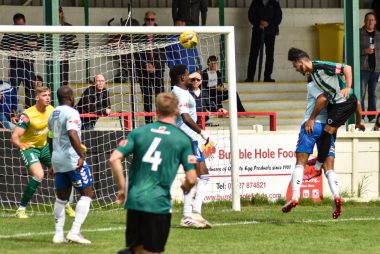 MIRO Pais was at the double against Hendon in Bromsgrove Sporting’s final pre-season warm-up last weekend to send the Rouslers into Saturday’s Southern League Premier Central opener at home to Leiston in fine spirits.

Brendan Kelly’s men will once again begin the trials and tribulations of a new campaign this weekend, and showed they are more than ready and raring to go with an astute 3-0 success over Premier Division South visitors Hendon.

FAIRFIELD Villa also had to settle for an opening-day point last weekend, albeit with far more goalmouth action, after a 2-2 home draw with Hampton.

A last-minute leveller from George Tolley rescued the Swans on the opening day of Midland League Division Two, but Fairfield had the greater share of the chances.

Villa hit the front on 25 minutes when Jake Wicketts thrashed home from the penalty spot, and they continued to show much promise going forward.

But a Jack Ward equaliser in first-half stoppage time was an untimely setback for Keith Draper’s men, and Hampton then went ahead through Kori Edinborough’s header 20 minutes from time.

Fairfield sent numbers forward and were rewarded at the death when Tolley turned and fired a delicious drive into the net inside the penalty area.

The Swans are back in action on Saturday at home to Boldmere Sports & Social Falcons.