Rouslers can only blame themselves for Needham defeat - Kelly 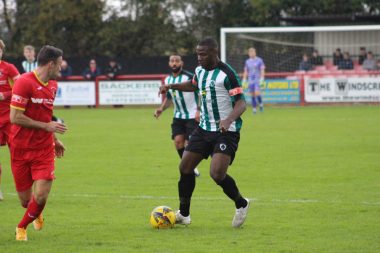 Gift Mussa squares up to his Needham Market marker. Picture by Phil Baker.

MANAGER Brendan Kelly says he could have no complaints with the comprehensive nature of Bromsgrove Sporting’s 3-0 defeat at Needham Market last weekend.

The Rouslers missed the opportunity to change the tide of the game in first half stoppage time when Leon Broadhurst missed a penalty with Sporting trailing to Callum Page’s 38th-minute opener.

Page was again on target ten minutes after the restart just moments after Sporting keeper Dan Platt kept out a Needham spot-kick, before William Hunt compounded Bromsgrove’s misery 21 minutes from time despite a second yellow card for the hosts Callum Sturgess late on.

For Kelly, the result was entirely a fair one given the balance of play at Bloomfields.

“We were given a lesson in movement,” he said. “They were really good with that when they were in possession of the ball. 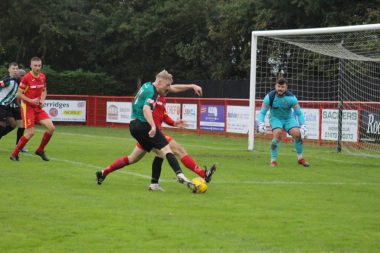 “When they didn’t have the ball they were very hard to break down, so I can’t have any complaints. We were beaten by a far better side.

“At times it looked like they were playing 14 against 11, they had players swarming all over the place and we couldn’t get to grips with it.

“They had players who were more comfortable on the ball than our lads, they were excellent. We helped them because we weren’t great.”

And as far as decent performances went for Bromsgrove, Kelly could only look as far as his keeper, adding: “[Daniel] Platt is the one that I feel sorry for because he played excellent, there were one or two others who could say they did OK but we just didn’t show up unfortunately.

“We had runners off us all, but when it’s 11 against 11 you have to take responsibility for the man you’re up against – far too often they had a man or two spare and worked the ball well.” 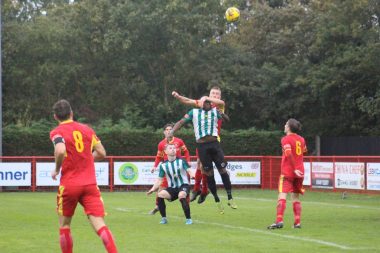 The Marketmen started brightly and were only denied an earlier breakthrough by the imperious Platt.

But when Page struck just before half-time with a shot that deceived Sporting’s shot-stopper, the hosts were buoyant.

Penalty misses for both Broadhurst and Hunt either side of the break meant the picture remained the same, although Market’s position was strengthened when Page touched home from close range after Ben Fowkes hit the post.

Hunt later atoned for his earlier miss with a well-taken finish to put the game to bed in the closing stages and condemn Sporting to a second league defeat this term.

Occupying 12th position, Bromsgrove have an opportunity to get themselves back on track in front of the Victoria Ground faithful on Saturday when welcoming 16th-placed Hitchin Town to Worcestershire (3pm).

Like Sporting, the Canaries have had a mixed start to the Southern League Premier Central season but will be flying high after taking a 2-1 scalp of Stratford Town last time out.