Richards capture a coup for Kelly

ANOTHER transfer coup has been made by Bromsgrove Sporting manager Brendan Kelly in the lead-up to the new season. 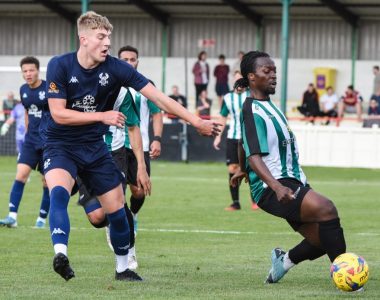 26-year-old Courtney Richards, who can operate in midfield and in attack, has joined from fellow Southern League Premier Central side Stratford Town.

The Jamaican has accumulated an impressive CV prior to his Victoria Ground move, previously appearing for the likes of Brighton & Hove Albion, Torquay United, Macclesfield Town and Solihull Moors.

Having appeared in pre-season friendlies against Leamington and Kidderminster Harriers, Kelly saw enough of his trialist to offer him contract terms with the club.

“He likes the energy around the place and can see we are hungry to do well. He has a brilliant footballing brain and is very versatile.”

He will go straight into Bromsgrove’s matchday squad for Saturday’s home league opener against Coalville Town (3pm), pending ratification from the Southern League.