Points the main prize for Sporting against Diamonds 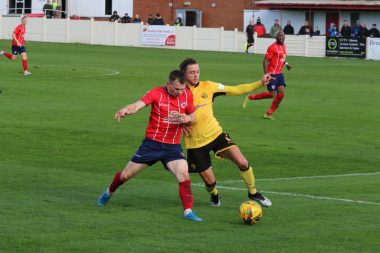 Jason Cowley, left, puts up a show of strength to win the ball. Picture by Phil Baker.

BRENDAN Kelly said it was points, and not performance levels, that were the priority in last weekend’s narrow 1-0 victory over AFC Rushden & Diamonds – Bromsgrove’s first win at the Victoria Ground this term.

Mikey Taylor was on target 14 minutes into the game to hand Sporting a second win in Southern League Premier Central, lifting them to eighth after five games played.

And with a crunch clash against one of the league’s early frontrunners in Needham Market – who are current joint-leaders – awaiting on Saturday, Kelly was keen to boost Bromsgrove’s points tally prior to their trip to Suffolk.

“I wasn’t bothered about how we played – I just wanted to win,” he said.

“I think performances so far have deserved more points than we have so far in the league. We saw it out this time, we were under some pressure at the end but we expect that against a team that were one down. 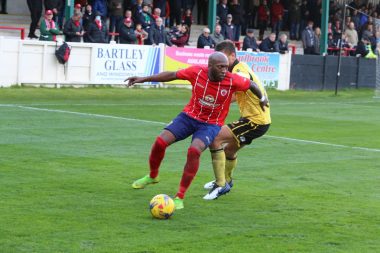 Mikey Taylor holds up the play. Picture by Phil Baker.

“We’re going to have to dig deep in every game, it’s a really competitive division, they came and tried their best, had some chances, [Daniel] Platt made a couple of saves.

“I thought we looked stronger first half than we did in the second, but our defending was excellent at times.”

With Bromsgrove perhaps culpable of losing concentration at times this campaign, the same could not be said in their latest outing – one which attracted a maximum-permitted crowd of 600 for a second successive home game.

Chris Lait was the man to provide Taylor’s opener, swinging in a cross that was too inviting for his fellow forward to turn down.

Sporting shot-stopper Platt did well to reach Jesse Akubuine’s effort, though he was left relieved when seeing the rebound from Fernando Bell-Toxtle crack the crossbar and ricochet away from danger.

Platt was kept busy in-between the Bromsgrove sticks, and got down well to a darting strike from Luke Farlamb before the break. 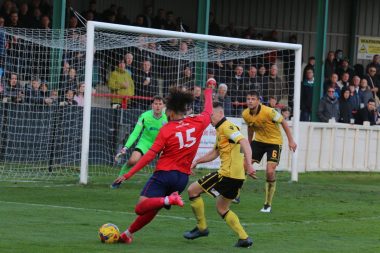 Farlamb could come no closer to scoring when his second-half attempt was deflected onto the woodwork, as Bromsgrove were forced to dig deep.

In a game that seemed destined to go right down to the wire, Charlie Dowd clattered the frame of goal inside the final ten minutes, though the hosts were able to see out victory.

Going into the Rouslers’ latest test this weekend, Kelly had one simple message.

“It’s a cliche but there’s no easy games,” he added.

“We travelled well down there last year and had an excellent performance [a 3-0 victory in December].

“It’s not new to us now, we know what to expect this time condition and pitch-wise.”