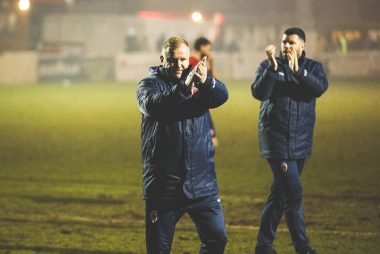 ROUSLERS manager Brendan Kelly admits he has been left “devastated” by the departure of assistant manager Andy Mason, who announced he was stepping down from his role at the Victoria Ground and retiring from the game last week.

Mason has been a part of the set-up at Bromsgrove Sporting ever since accepting an offer to join the club’s coaching staff in 2017, when he first became acquainted with Kelly – then an assistant to legendary Rouslers manager Paul Smith.

A year later in March 2018, Mason’s role was upgraded in becoming Kelly’s right-hand man in the wake of Smith’s shock resignation – a role the duo have held ever since – guiding the Rouslers to successive promotions from the Midland League Premier Division and Southern League Division One Central, before overseeing a successful first campaign at Step Three of the non-League ladder in 2019/20.

Having lost a key cog in the management team and a secondary voice in both the dressing room and on the touchline, Kelly says that he will continue to hold his now former number two in high regard.

“I’m devastated that Andy has come to this decision, but I completely understand why and respect his choice,” said the Bromsgrove boss.

“He has played an integral part in the club’s rise in recent years and has had longevity in the football industry, which is a difficult thing to achieve these days.

“When Mase came through the door at Sporting as a coach, we immediately clicked and hit it off, in terms of how we viewed the game, our thinking was the same.

“The transition from me to manager and him to assistant was probably the smoothest any of us could have asked for, we excelled as a management team, we were open and honest with each other and had the same goals – many of which we achieved.

“Andy will be the first to admit he is set in his ways and is quite old school, but it worked, his methods of coaching worked and the statistics prove that.

“He was a fans’ favourite and always made time for the Sporting faithful.” 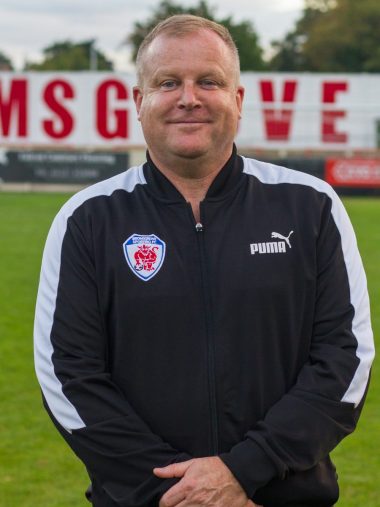 Andy Mason oversaw three promotions with the Rouslers in all – the first in 2016/17 as a coach, before further successes in 2017/18 and 2018/19 as assistant manager. Picture: Tom Fuszard.

The news comes after Bromsgrove’s 2020/21 Southern League Premier Central campaign was officially drawn to a close, as per a Football Association announcement which confirmed the worst fears of Step Three to Six clubs in immediately curtailing the season.

For Kelly and Co, the task of building for the new campaign has been made tougher by the need to appoint a new assistant manager, although the timing of the decision has at least provided the club’s hierarchy with plenty of time to plan their next move accordingly.

While Mason can now enjoy retirement with his wife Laura, the connection with the club will remain, he reiterates.

“It’s been a fantastic four years and I’ve thoroughly enjoyed it,” he said.

“Three promotions in my four years has been incredible to be part of.

“I have decided the time is right for me to retire and make some changes.

“I’d like to wish all the very best to Brendan, for the great manager he is and will become, to all of the players that have served me well for the last four years – including all of those that have come to the club – and the best of health and best wishes to all of the Shedenders and fans.

“The good news is that there is a return to football in June, I hope the fans will come back and continue enjoying their football.

“I will be following the success of the club closely, as it will always have a place in my heart.”

Chairman Mike Burke also passed on his well wishes, adding: “Andy has been a huge part of the success of Sporting over the last few years.

“He became instrumental in the smooth transition to the new management set-up, with him becoming assistant to Brendan. This ensured the continued progress on the pitch, at what could have been a vulnerable period for the club.

“From a personal point of view, he also became a good friend, so although it is sad he will no longer be part of the team he will always be a part of the club.

“I look forward to sitting alongside him in the Thomas Jones Stand come matchday when we’re allowed.”