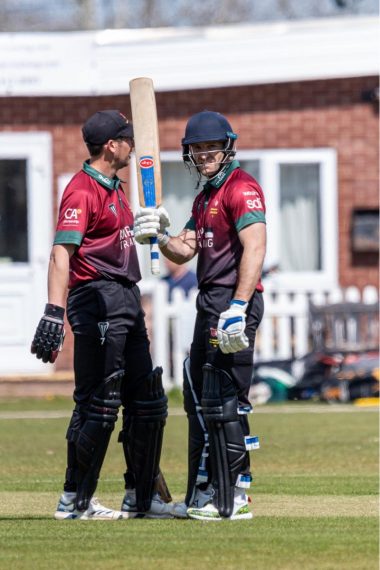 Jayden Levitt, right, was on form once again with a second century in successive weeks. Picture by James Hickin Photography.

While the 34-year-old was unable to hit the heights of his unbeaten 152 against Wolverhampton a week prior, he was still able to contribute 110 runs during his time at the crease as the Boars battled on to 243-7.

With Dorridge chasing a revised target of 203 in 40 overs, Bromsgrove’s bowlers worked efficiently to extinguish any hopes of a win for the visitors who were dismissed for 165 with eight balls remaining.

The Boars impressed after being put into bat, Connor Smith (36) and the formidable Levitt forming an opening partnership of 91.

While the former was the first victim claimed by Jack Mills (3-50), the hosts’ shining light continued to solider on and put on 82 runs with Alex Milton (35).

Levitt’s departure for the fourth wicket preceded a slump in Bromsgrove’s run count, although the Boars ultimately managed to reach a defendable score regardless.

Dorridge had early promise from top-order duo Roshan Venkataraman (44) and Ben Shepperson (32). Mark Evenson was a thorn in the visitors’ reply, taking out four of the opposition’s middle-order batsmen for 29 runs to keep the hosts in full control of affairs.

On Saturday, the Boars will face another of the league’s unbeaten sides with a trip to Kenilworth Wardens at Glasshouse Park.