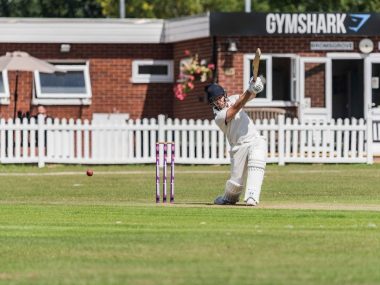 Jayden Levitt was back amongst the runs again last weekend for the Boars. Picture by James Hickin Photography.

OPENER Jayden Levitt’s quickfire half-century was not enough to inspire Bromsgrove to victory last weekend, as Harborne’s Swapnil Gugale put on a stunning all-round display to down the Boars.

It meant Mark Evenson’s side slipped to a second successive defeat in Birmingham & District Premier Division Two and dropped down to sixth in the table, following the 107-run loss at St Godwalds Park.

Batting first after winning the toss, Gugale (60) and Tejas Wagle (90 not out) were the standout names as Harborne piled on the runs to frustrate Bromsgrove’s bowling line-up, posting a final score of 267-5.

Despite Levitt laying a key foundation early on, the lack of a supporting cast, in tandem with Gugale’s five-for, condemned the hosts to a frustrating defeat that leaves Bromsgrove without a league win since May 1.

Harborne’s Guriq Randhawa (26) and Gugale posted an opening partnership of 50 before the latter combined with Karan Bharaj (24) for 58 runs for the second wicket.

While the visitors slipped to 113-4 after Connor Smith (2-60) picked up a couple of wickets, the introduction of the unbeaten Wagle led to a stand of 63 with Jack Holloway (28) to help Harborne’s cause.

Top scorer Wagle then went one better with skipper Tom Arnold (27no) in a 91-run stand to smash their team to a comprehensive final score.

Levitt (50) and Smith (13) made an encouraging start to Bromsgrove’s reply with an opening stand of 66 that saw ten boundary hits for the former before his dismissal – a moment that ultimately swung the pendulum in Harborne’s favour.

After Daniel Wright (2-27) took the first two wickets, Gugale (5-19) stepped in to spell further misery for the Boars batsmen, leaving the hosts in danger of collapsing completely at 99-7.

There must be some credit then to the way in which Tom Downing (24) and Evenson (38) clambered on to keep Bromsgrove alive, smashing 52 runs between them.

Once Downing was removed, however, tailender William Tuffin (1) and the Boars skipper soon followed suit to end their challenge in the 40th over.