Landell off the mark for Sporting as Swifts downed 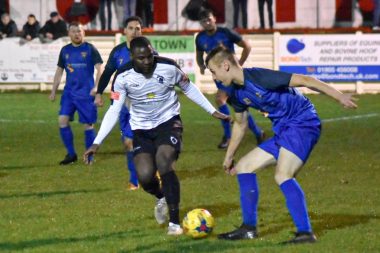 SPORTING were given another valuable run-out on Tuesday night, seeing off Stourport Swifts 2-0 at the Victoria Ground.

In a one-off friendly – separate from the festive Red Recruitment Trophy which is currently ongoing – goals from Will Shorrock and Andre Landell keeping Brendan Kelly’s men on the winning track, with spirits still high from their 3-1 victory over Redditch United on the opening night of the Trophy.

With both Worcester Raiders, and then replacements Evesham United, both pulling out of the Trophy due to league commitments, a free slot became available in midweek which Stourport duly accepted.

The Swifts impressed in the early stages, Joe Phillips going close with a deflected effort before Jak Watts thrashed a volley wide of Max Beardmore’s goal.

Down the other end, Gift Mussa stung the gloves of Dominic Richards with Bromsgrove’s first attempt on goal, followed up by Jason Cowley and Miro Pais attempts which went wide of the mark.

With the scoreline still level at the half-time interval, an overhaul of the starting XI gave the hosts fresh impetus, the opener arriving on 53 minutes when Shorrock found the net from inside the penalty area with the aid of a deflection.

The Midland League Premier Division visitors threatened to draw level as the game headed towards its conclusion, Johnny Johnston almost making the perfect impact from the bench when crashing a shot against the crossbar. 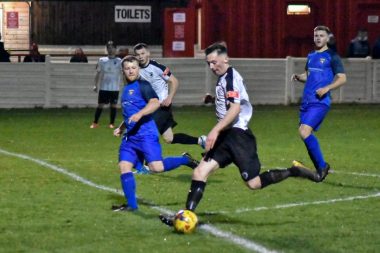 But the Rouslers got their insurance goal with 14 minutes when new boy Landell, making his debut for the club, made his way past two players, forced a save from Dom Richards before forcing home the rebound.

Second-half goalkeeper Dan Platt still had to be alert in the closing stages to maintain Bromsgrove’s clean sheet, saving from Johnston before having his defence to thank for blocking James Hill’s strike on the goal-line at the death.

Next up for Sporting is the second match of the Trophy, when hosting Alvechurch on Boxing Day in a mid-day kick-off.

Tickets for the fixture are still available by clicking HERE or heading to the link below, with attendance numbers again restricted to 600.