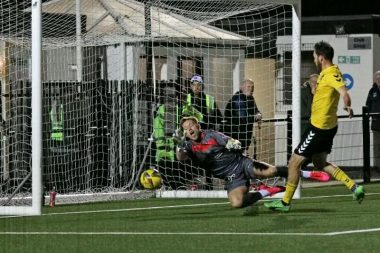 LATE anguish was felt by Bromsgrove Sporting and manager Brendan Kelly after a gut-wrenching 4-3 loss away to Rushall Olympic on Tuesday night.

The Rouslers had recovered from a dismal first-half showing in which they found themselves two goals down to draw level with 25 minutes remaining, going on to take the lead before two last-gasp strikes won it for the buoyant hosts.

Rushall’s opener was a harsh one for the visitors to take given the 20th-minute penalty save by Sporting ‘keeper Dan Platt to deny Sam Whittall, with the rebound falling kindly to the defender to score at the second attempt.

Eight minutes later and it was two for Olympic, former Wolves winger Michael Kightly unselfishly laying the ball on for Nehemiah Zazi to fire home after a defensive mishap.

But when a fortuitous own goal from Orrin Pendley – who inadvertently blocked a clearance from Whittall which went into the back of his own net – five minutes before the break, it was game on again.

Bromsgrove were revitalised, and after slowly growing into the second half found themselves level in the 65th minute when a drive from Chris Lait packed too much venom for Rushall’s Jonathan Flatt to keep out. 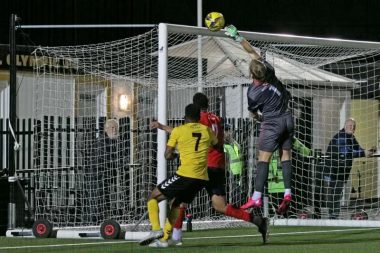 Dan Platt is forced to tip over the bar. Picture by Steve Walker.

Five minutes later and the Rouslers were in dreamland, Taylor controlling a through pass and then dispatching the ball into the roof of the net in one fluid motion to put the away side in front.

Rushall refused to go down without a fight, and so were rewarded when Eesa Sawyers smashed in an 84th-minute leveller inside a packed penalty area.

The final twist to the game arrived with a minute to play, when Riccardo Calder let fly an unstoppable shot that crept into the bottom corner of Platt’s net to down Sporting at the death.

And with three points snatched from Bromsgrove’s grasp in stunning circumstances, there was only one way that Sporting manager Kelly viewed the final outcome.

“Frustrating I suppose is the word,” he said.

“Because you come away from home against a brilliant side – have the first half we had which was way below standards – come back out, make a fist of it and go in front with two pieces of quality.

“The second-half showing was a lot more positive, even though it still wasn’t to the level that I expect, or that we usually play.”

While some moments of magic were provided by his side after the break, he said a lack of this inspiration in Sporting’s play ultimately cost them at Dales Lane.

“It was a really good strike by [Chris] Lait, and an excellent touch and finish by Mikey [Taylor],” Kelly said – in reference to Sporting’s second and third which completed the comeback.

“We didn’t show that quality enough. When you get yourselves 3-2 up with less than ten minutes to go, you expect to try and see the game out.

“We struggled with game management again. On the basis of our first-half play, we didn’t deserve to win the game at all – I really thought the game was done and dusted because they were that dominant I didn’t see a way back.” 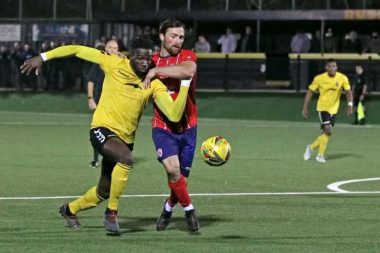 Further troubles in the form of players being unavailable and unfit has given Kelly plenty of problems at the start of the campaign, with the story still very much the same in the midweek defeat.

“I’m really frustrated with injuries at the moment, there are some important players carrying injuries and others who are not 100 percent fit – so that’s hindered us,” he added.

“Tom [Taylor] and Nathan [Hayward] weren’t at 100 percent fitness, hence their substitutions, these are big players and we can’t be rash with them. We need them back fit as soon as possible.”

Leon Broadhurst is a player likely to return next week, having sustained an injury in last weekend’s slender 1-0 victory over Biggleswade Town – where debutant Luke Ward was the match-winner with an 83rd-minute tap in from close range.

Bromsgrove currently occupy 12th place in the table with four points after three games played, but now have a weekend for an extra training session scheduled with no game to fulfil due to their early FA Cup exit.

Instead, their next outing will be on Tuesday night, when hosting Tamworth at the Victoria Ground in a 7.45pm kick-off.

The Lambs are unbeaten so far this term, drawing their opener at Peterborough Sports 1-1 before defeating St. Ives Town 4-2 and Barwell 2-1 in their subsequent fixtures.

Online ticketing for the Bromsgrove Sporting v Tamworth game on Tuesday 6th October will be available from the following link: https://www.bsss.org.uk/products/bromsgrove-v-tamworth from 9 a.m. Friday 2nd October.

Ticket purchase will be limited to six persons per transaction, with full details available when you click on the link.

Tickets can either be downloaded to phone and/or printed out.