BROMSGROVE Sporting earned themselves a home FA Cup Third Qualifying Round tie with Welwyn Garden City on October 2 after disposing of Worksop Town on Saturday.

The Rouslers were rampant, beating the Derbyshire club 6-0 at the Victoria Ground.

A simple tap-in by Nathan Hawyard opened the scoring after just four minutes and Sporting went from strength-to-strength from then on.

Joel Kettle scored the second on the 32-minute mark after a free-kick from Cameron Ebbutt.

There was more of the same in the second half as Ebbutt grabbed his second after 58 minutes, pouncing on some inept defending. 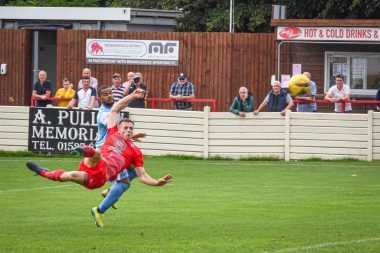 An acrobatic volley from Hayward made it five and Shorrock completed the rout by slotting in late on.

Manager Brendan Kelly said: “We weren’t expecting that – the first goal was quite fortuitous and even then they were the team more on the front foot.

“But after we got the second we were comfortable and it was nice to have a relaxing afternoon on the sidelines for a change.

“Our quality in the final third was the difference and it was nice to get another clean sheet.”

This is the furthest The Rouslers have come in the FA Cup but Kelly added he wasn’t looking too far ahead in the competition.

“The best thing about it is the prize money for each round but we always try to win every game – whatever the competition – so we just want to keep this unbeaten momentum going.” 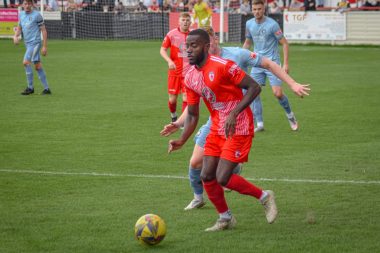 With another home match on Saturday against Royston – one place below them in the league – Kelly appealed to the fans to turn out in their droves.

“We haven’t got attendances up yet to where we need them (it was 722 on Saturday) but hopefully those who saw us score six and keep a clean sheet will come back along with others.

“With five or six home games in a row, it’s a good chance for the fans to get to know some of the new players who haven’t yet experienced what the atmosphere can be like down here. We appreciate all the fans who do come but it’s definitely too quiet at the moment.”

Saturday’s match kicks off at 3pm at the Victoria Ground.