Kelly: Trio will give us strength in depth 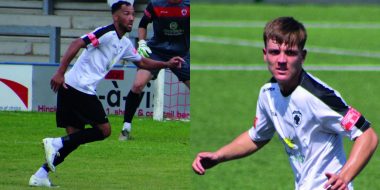 From left: JJ Cole and Josh Dugmore have both caught the eye in pre-season for the Rouslers. Pictures by Bromsgrove Sporting.

THE ROUSLERS revolution continued at the beginning of the week, after Bromsgrove Sporting snapped up three more players to bolster their squad less than three weeks before the season kick-off.

Manager Brendan Kelly has been wasting little time in revitalising his Sporting side, one which was hit by a lengthy list of departures at the end of the previous campaign, but now has the firepower and depth back in the ranks to suggest a positive season ahead is in the offing for the Bromsgrove faithful.

Speaking on the improvements to Bromsgrove’s rearguard, Kelly said: “Josh has come in and trained brilliantly, his performances in games have also been a joy to watch.

“His maturity on the ball for a young lad is very impressive and he has a fantastic engine.

“I’m delighted he has chosen to sign for us, he also knows all about the club as he is the nephew of former fans favourite Luke Dugmore, so he already knows some of the players.

“This will help him massively in my view.

“JJ has been in great shape and performed really well in our friendlies and is popular amongst the group.

“For me, he has stood out when he has played.

“He has a great footballing brain and is extremely calm on the ball, so he will be a valued addition.”

Sporting already know plenty about Zazi, 23, who has also previously turned out for Stourbridge, Coleshill Town and Alvechurch, having hit the net in Rushall’s 4-3 win over Bromsgrove last term.

“Nehemia is a very good striker, every time we have played against him, he has caused us problems,” Kelly continued.

“He has power, pace and can finish, so this provides us even more competition up front now which can only be very healthy.”

As far as matters on the pitch have been concerned, Sporting were narrowly downed at Leicester Road in last Saturday’s 1-0 defeat.

In what was Bromsgrove’s final friendly on away soil, Jake Brown’s 28th-minute winner was the difference at De Montfort Park, while there was further frustration after Tuesday night’s home friendly with Gresley Rovers was cancelled.

It means Kelly’s men have three further warm-up fixtures remaining, all at their Victoria Ground home, starting with a meeting with Coventry United on Saturday, before the visit of Coleshill Town on Tuesday night.