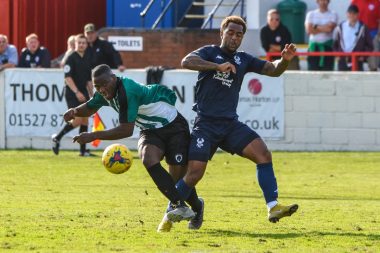 A GLOWING tribute has been paid to outgoing midfielder Gift Mussa by manager Brendan Kelly, bringing an end to the 25-year-old’s two-year association with the club.

Becoming something of a lynchpin in the middle of the park for the Rouslers ever since signing from Leamington in November 2019, Mussa has departed for pastures new – which remain undisclosed at this stage – during a week in which the club have announced two new signings.

The first, a new midfielder in the form of Northampton Town’s Jack Newell, will strengthen Bromsgrove considerably having impressed in Red Recruitment Trophy outings against Redditch United and Alvechurch at the end of last month.

And the second, albeit an off-the-field addition, comes from Irish sportswear manufacturer O’Neills – who will be kitting out the club from next season – joining the likes of Wycombe Wanderers and Hartlepool United in the brand’s footballing line-up.

Addressing the club’s most recent outgoing, the Sporting boss says he will always be welcome back to the Victoria Ground having become a valuable member of the first-team squad. 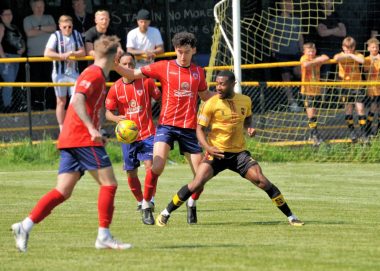 “Gift has been superb since I signed him,” Kelly said.

“I chased him for two years and he is a pleasure to work with, but unfortunately for us, Gift has had an offer that is very difficult for him to turn down.

“Sometimes you lose good players to better offers elsewhere and this is one of them – the door is always open for him should his new venture not work out.”

In regards to Bromsgrove’s fourth summer signing, Kelly admits the club have achieved something of a coup in gaining Newell’s signature, adding: “He has had interest from clubs in our division, so I’m pleased he has chosen us.

“He is a type of midfielder we have never had before, and will be a very good addition, Jack spent ten years at Northampton and has had a fantastic football education.

“He’s had some experience in non-League in the form of some loan spells – he actually played against us for Corby Town in the 2018/19 play-off final – so he is no stranger to the Victoria Ground and I’m looking forward to working with him.”