"It is an almost total rebuild" says Kelly, as Sporting prepare for life without Cowley

MANAGER Brendan Kelly has moved to reassure Bromsgrove Sporting fans in the wake of further departures from the club, and says the Rouslers will continue to live within their means as transfer activity continues in the lead-up to the new season.

As it stands, 13 players have left the Victoria Ground in all – most recently club legend Jason Cowley who has moved to Southern League Premier Central rivals Stourbridge – whilst 15 first-team members current and existing will be at Sporting on the first day of the 2021/22 season.

With such a sizeable turnaround in playing numbers, the Irishman accepts that expectations must be altered as a result, but promises more reinforcements to keep Bromsgrove competitive on the pitch.

“With the more recent departures of players like Gift Mussa [to Nuneaton Borough] and Jason, it goes without saying that we do our best to secure players we want to keep,” Kelly said.

“But sometimes we cannot compete with other offers out there, players have demands of what they feel they are worth.

“The resources we have are sound but they are not enormous or vast, and what’s most important is that the club remains in good health and not stretch itself – when we have had little or no income now for some time.

“Player move on and going forward, it’s important that we identify and recruit players that fit the club and the team.

“We will be working hard to make sure we are as competitive as possible, but with an almost total rebuild in progress, it would be silly of us to forecast or to say where we think we will finish at the end of the season.

“It’s a new squad and it will take time to learn about each other and come together, but we have some brilliant players that have committed to us and that is a real positive for me. I’m sure some of them will become new heroes for the Sporting faithful.” 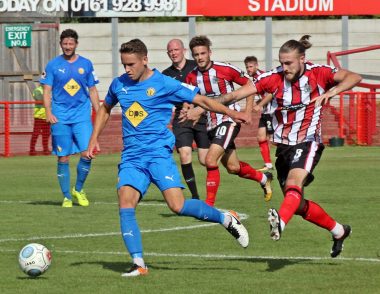 New Sporting man Kieran Dunbar, left, has plenty of experience at a higher level from his days with Leamington. Picture by Sally Ellis.

“We will be trying hard to sign more players and yes, there will be strikers and maybe in some other positions too,” Kelly added.

“Some clubs have been at this level for decades, so we can’t think we will stroll through the league and automatically gain promotion.

“I will be approaching each game still with a winning mentality, and trying to provide a standard of football that the fans can enjoy and be proud of.”