IN PICTURES: Bromsgrove Sporting's unbeaten run comes to an end against Royston

BROMSGROVE Sporting suffered a late defeat at home to Royston Town this past weekend which brought their six-game unbeaten run to an end.

The host’s misery was compounded when Cody Fisher saw red for a rash challenge five minutes from time. 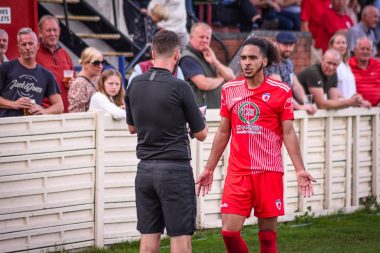 The result leaves Sporting in 13th place in the Southern League Premier Division Central level on points with rivals Redditch United with a game in-hand.

Bromsgrove came into the clash off the back of an emphatic 6-0 win against Worksop Town in the FA Cup but were unable to find that same scoring touch against a stubborn Royston side.

However, Brendan Kelly’s side started brightly and took the lead when Miro Pais crossed for Masidi to head home after he was left unmarked in the penalty area.

Masidi almost doubled his tally on the hour mark only to be denied by Royston keeper Joe Welch from close range.

The visitors should have equalised when Adams headed wide when well-placed to score.

Then Murray found the leveller on 68 minutes heading in off the post.

The two teams traded chances before substitute Isaac Galliford was fouled in the box.

Adams converted the resulting spot kick with Fisher dismissed just three minutes after the Crows had taken the lead.

Sporting almost snatched a point right at the death but defender Joel Kettle shot wide when one-on-one with Welch.

That means Kelly’s side will need to regroup ahead of their match with Hednesford Town tomorrow night.