BARNT Green go into Saturday’s Graham Williamson Trophy semi-final with Berkswell (11am) on a high after topping Group Four with their eighth victory of the season against Ombersley last weekend. 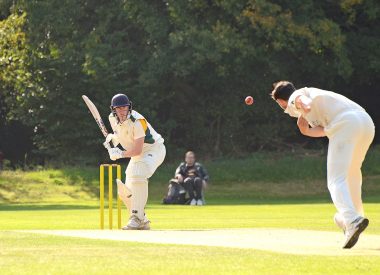 A rampant 177-run win at Cherry Hill Road was the perfect way for Green to flex their muscles ahead of the crunch tie, choosing to bat first after the toss and accumulating 284 runs for three wickets conceded.

Edward Pollock (111) and Ben Chapman-Lilley’s (112 n.o) majestic opening stand of 170 had a big part to play in reaching that final total, while Jacques Banton’s (40) arrival at number three helped continue the hosts’ fine batting spell before he was caught by Tom Cosh from a George Panayi delivery (2-66).

The departure of Ombersley opener Liam Gwynne (0) from the first ball faced caused alarm bells to ring for his side, after Andrew Sutton (5-22) caught and bowled the visiting skipper to begin a memorable five-wicket display. 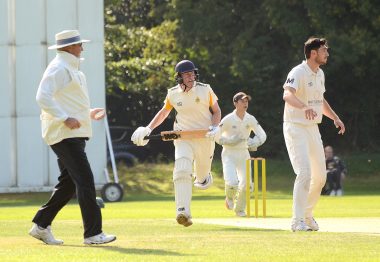 It was Shurmer’s dismissal of number four Declan Lines (29) which was most crucial, preventing the visitors’ top run scorer from building a more considerable tally.

And while Tom Cosh and Elliot Mason (both 20) tried in vain to resurrect the innings for their side, Barnt Green were good value for victory in the 33rd over.

Green’s next opponents, Berkswell, also topped their group – registering an identical record of eight wins, two losses and 32 points – with a 50-run triumph over Dorridge last time out giving no early indication of who could edge the last-four clash.

Elsewhere, Barnt Green’s third XI will be in with a shout of silverware when contesting the WCL Regional Super40 Shield final with Burghill, Tillington and Weobley Seconds on Saturday (noon).

The showpiece at Ombersley Cricket Club follows their six-wicket triumph over Shropshire side Claverley in Sunday’s semi-final, where bowler Sam Johnstone’s four-wicket display for 19 runs conceded helped stunt their opponents.

Smith heroics in vain as Boars slip down table

Who will win Wimbledon titles? – 2021 preview