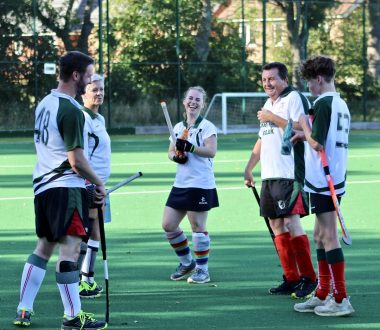 HOCKEY fanatics are waiting with baited breath for the resumption of the sport, ahead of a key meeting on Monday to discuss a restart to action next weekend.

The Midland Men’s Hockey League – in which six teams from Bromsgrove and three sides representing Droitwich play – has been suspended since the commencement of the second national lockdown, with no fixtures taking place since October 31.

While optimism of a return last month was ultimately snuffed out as a result of the restructured coronavirus tier system, the resumption of training and the permittance of friendlies has at least provided a step in the right direction for competitive play to get back under way.

Droitwich men’s first team, seen in action against Stourport in October, are just one of the sides hoping for an imminent return next weekend. Picture: Mathew Mason.

The current expectation is that play will indeed resume on Saturday, January 9 – with the previous rounds of fixtures in November and December cancelled outright with no matches to be rescheduled.

Discussions over end-of-season promotion and relegation will also be on the agenda for the Midland Men’s Hockey League committee, should the best case scenario of competitive hockey restarting come to the fore.

Meanwhile, Bromsgrove and Droitwich’s women’s sides, who primarily play in the Worcestershire Hockey League system – with the exception of the former’s first XI in Midland Region Division Two – are expected to be on hold until the end of January.

The next round of fixtures pencilled in for women’s fixtures currently falls on January 30 across the board.