Ebbutt the man for Kelly after Sporting move 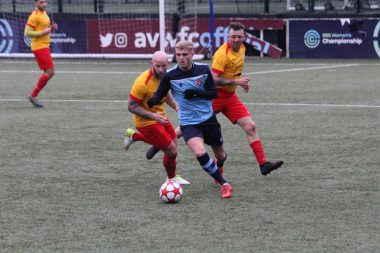 The 21-year-old, formerly in the youth ranks at Birmingham City and Bristol Rovers, has turned out in more recent years for National League North clubs Hereford and Gloucester City, and will bolster the Rouslers attacking options both through the middle and out wide.

Having appeared in some of Sporting’s recent pre-season friendlies, Kelly admits he has seen enough of Ebutt’s talents to believe that he can be a success for Bromsgrove.

“Cam has been with us since May and has trained really well,” said Sporting’s manager.

“In the last couple of games, he has shown me enough to believe he will give us a good option at the top of the pitch.

“He can operate through the middle and out wide, and technically he is extremely good, so I’m pleased to have signed him.”

Bromsgrove’s run of two wins from two in pre-season was ended on Tuesday night, as a mixed side of first-teamers and trialists were downed 2-1 at Littleton.

The Hellenic League hosts struck twice in quick succession before the hour mark to put themselves in the driving seat, before a trialist netted on 66 minutes to cut Littleton’s lead in half.

Despite that crumb of encouragement, Bromsgrove did not have enough in the tank to get back on level terms, meaning they could not build on an encouraging 2-0 victory at Sutton Coldfield Town.

Again, it was a trialist on the scoresheet to give Sporting the ideal start on five minutes, before Luke Ward added a second just before the break.

With a succession of substitutes at half-time, a less eventful half followed at the Central Ground as the Rouslers saw off the Northern Premier League side.

Next, a Midland League double-header awaits Kelly’s men, first with the trip to Romulus on Saturday, followed by an away day at Stourport Swifts on Tuesday.