After limiting Halesowen to a measly total of 113 after 34 overs, The Green required just under 18 overs to romp to an impressive victory in the Birmingham & District Premier League.

Darrel Williams was one of the main culprits behind the hosts’ misfortunes at Seth Somers Park, taking five wickets for 27 runs conceded, while Jacques Banton (2-23) took a key wicket in bowling Ryan Lockley (33) lbw.

While openers Brar (73 n.o) and Ben Chapman-Lilley (6) only managed to reach 31 runs by the ninth over, the dismissal of the latter allowed Banton (30 n.o) to step in and form a ruthless partnership at the crease.

The two Greens top the table on 24 points, with Barnards Green holding the advantage based on their six-wicket win back in July.

That could all change, however, when the two table-toppers go head-to-head at Cherry Hill Road on Saturday (11am).

BOTTOM-SIDE Bromsgrove suffered a further set-back after their meeting with Ombersley at St. Godwald’s Park was cancelled because of a COVID-19 scare.

While no Boars players have displayed symptoms, the same could not be said of the visitors – with two other matches in the league also cancelled as a result.

Another home match against fourth-placed Halesowen (Saturday, 11am) offers Bromsgrove the chance for a reprieve this time around. 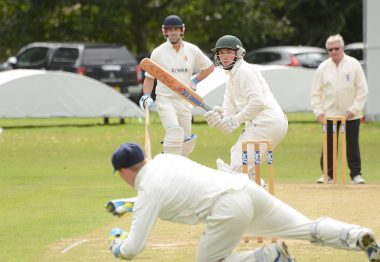 Taking 3-44 – his best return so far in Group B of the Worcestershire League Regional Championship Trophy – Critchlow’s bowling efforts helped limit the hosts to 153-9.

And the Himbleton man was relentless with the bat too, smashing 72 before being caught and bowled by Joe Ingle, although the stand went a long way to earning victory after 35 overs despite the best efforts of Avoncroft’s Josh Cound (3-19).

Himbleton remain fourth in the group on 96 points, while Avoncroft remain rock-bottom with 43 points to their name.