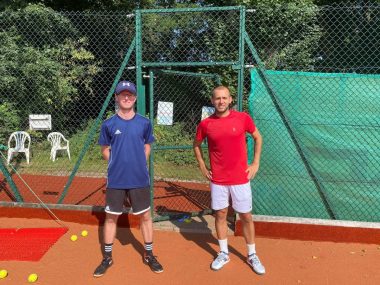 A DOUBLE nomination has got everyone at Barnt Green Sports Club jumping for joy after being shortlisted for two awards by the Herefordshire & Worcestershire LTA.

The tennis section at the club, based on Margesson Drive, enjoyed a successful 2020 despite the difficulties faced throughout the year, earning a nomination for Club of the Year after a significant uptake in members and community outreach.

Schemes to get other sections of the club involved in playing tennis proved a success with existing members, while non-members were provided with numerous incentives to increase membership to the highest level witnessed at Barnt Green.

As far as community efforts were concerned, a partnership with Bright Ideas for Tennis and men’s mental health charity Tough Enough to Care provided support when it was needed most, while sessions dedicated to members with visual impairments and learning disabilities ensured greater inclusion.

And in a compliment to the standard of the facilities at the club, Solihull’s Dan Evans – the current British men’s number one and number 32 in the world – and his team trained in Barnt Green after the first lockdown, subsequently becoming an honorary member of the club.

Meanwhile, Barnt Green coach Christopher Davis has been put forward for the Development Coach of the Year award for his work with the club’s youth section and his online daily tennis challenges – which have provided both entertainment and motivation to stay active during each of the national lockdowns.

Davis has earned praise for his positive approach to sessions, which have helped to cultivate a greater love and appreciation for the sport amongst the junior section that he coaches.

His inventive daily challenges from home have even managed to cater for older or casual tennis players. His Tennis with Chris Facebook page totals close to 100 videos to provide regular motivation on social media.