THE QUEST to make Bromsgrove a centre of excellence for walking sports will be stepped up later this month with new sessions taking place on the astroturf at the town’s hockey club. 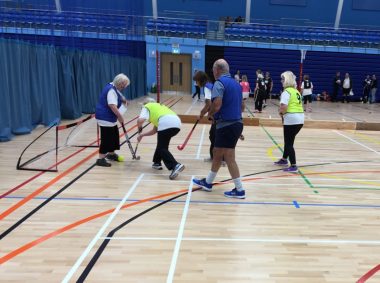 It is hoped a pilot event will run in February with a view to starting full sessions in the spring.

Alan is also planning to meet with Bromsgrove Cricket Club about a slower version of that sport.

Last month a group of 11 players from Bromsgrove’s Walking Hockey journeyed to the University of Warwick’s Sport and Wellness Hub showcased the slower version of the sport which was started in the town and has since been extended worldwide.

Alan Gormley said: “We had a lot of interest and it was good because we got to try all the other walking sports.”

Alan joked he especially enjoyed the walking netball as, not only was he on the winning team, he also scored the winning goal.

The event was also good for networking and Alan said he spoke to representatives from the Football Association.

Alan Gormley also joined us on the Standard Podcast on October 16. Click the link below to listen.