THE NORTHFIELD-based ambulance crew who saved the life of a seven-year-old boy who went into cardiac arrest at his home have met him just six weeks after the incident to catch up on his recovery and present him with his very own football shirt.

Tommy Plant became ill at his home in Brandwood End on January 19 and his condition worsened.

When crews arrived they found his dad Jason performing CPR on the youngster. 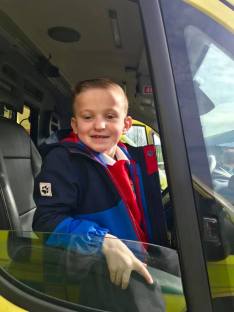 After being treated at the scene he was taken to Birmingham Children’s Hospital (BCH) in cardiac arrest where staff took over his care and managed to get his heart restarted.

Today, Tommy and his parents went to Hollymoor Ambulance Station to meet and thank the crews who helped to save his life.

West Midlands Ambulance Service operations manager Wendy Hands said: “This was a real team effort, from the staff in the control room who provided CPR advice over the phone, the dispatchers who got the ambulances to the scene so quickly and the staff who took over from Tommy’s Dad.

“None of us can believe how well Tommy looks and we’re just so pleased to be able to meet him today.”

Blues fan Tommy was presented with a Birmingham City shirt with ‘Tommy 999’ printed on it as a gift from the Hollymoor staff. 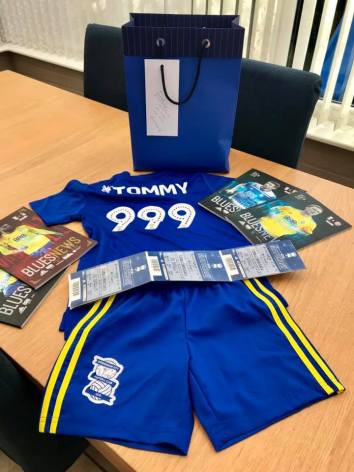 The football club were also kind enough to donated six tickets for Tommy and his family to attend the next match against Millwall.

Tommy brought a card, chocolates and biscuits to thank staff for saving his life.

He was able to tell staff about his recollections of the day including ‘being in the bumpy ambulance’.

Tommy and his parents are now raising money for Birmingham Children’s Hospital Charity.

Speaking on their Just Giving Page, the family said they feared their life would never be the same again but the staff at BCH managed to get his little heart beating again.

“The staff within the A&E department worked tirelessly to save him, not forgetting the wonderful WMAS who supported him from home to the hospital. 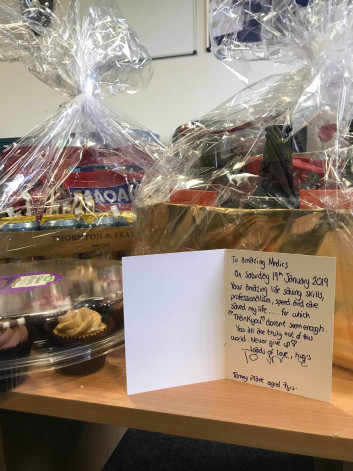 “Due to such amazing care, support, dedication and professionalism, Tommy walked out of Birmingham Children’s Hospital on 4th February.

“We owe them everything, so we are wanting to raise not just awareness of the world class care and treatments they provide, we also want to give something back – as much as we can, therefore we are hoping to raise money to support these life savers, to ensure that they can continue in the amazing work they do.

Visit www.justgiving.com/fundraising/jason-plant3 for more information and to donate to the cause.