Mark Henderson challenged himself to run 50 half marathons, or 650 miles, to celebrate his 50th birthday and finished his last race in Las Vegas. 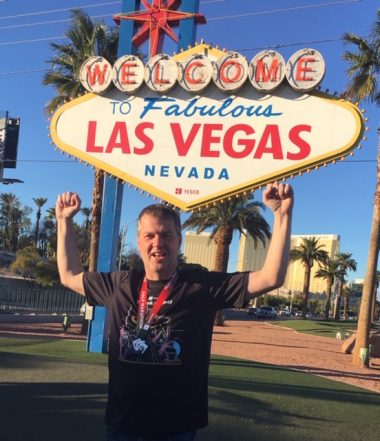 In 2011, Mr Henderson’s wife Alison passed away at St Richard’s Hospice after living with cancer.

Over the past year Mr Henderson has raised £1,210 for the Worcester hospice and has also made donations to two other charities.

Mr Henderson said “It was a massive challenge for an everyday plodder, I’m so thankful to have completed it.

Every run was a mini 50th birthday party and they all had something special.”

Some of Mr Henderson’s most special moments of the challenge took place closer to home.

He added: “I ran the Worcester Half-Marathon and in a village an elderly lady thanked me for running for St Richard’s as her husband died there.

“This was the very reason I was running so it completely spurred me on.”

The hospice strives to provide the best medical, practical, emotional and social support they can to help people live life to the fullest, as independently as they can, for as long as they can.

It cares for people with a range of illnesses including heart failure, Parkinson’s and motor neurone disease as well as cancer.

Jodi Brandwood, the hospice’s fund-raiser, said: “We are so proud of Mark’s achievement and are thrilled he chose to support St Richard’s.

“The fantastic amount Mark raised for the hospice will help ensure that we can continue caring for patients living with life-limiting illnesses and their families when they need it most.”