CENTRAL Motorway Police Group has arrested two drivers on suspicion of drink-driving, just 24 hours after the launch of the Christmas drink and drug-driving campaign.

The first incident was on the M42 at 8am this morning.

Officers spotted the motorist in a BMW X5 on the southbound carriageway. The car was without its front wheel or back tyre and collided with a crash barrier.

The 24-year-old was arrested on suspicion of dangerous driving, driving whilst disqualified and failing to provide a specimen.

The second happened in Birmingham and involved a Ford KA.

It had no front tyre but luckily the car was safely brought to a stop by traffic officers. 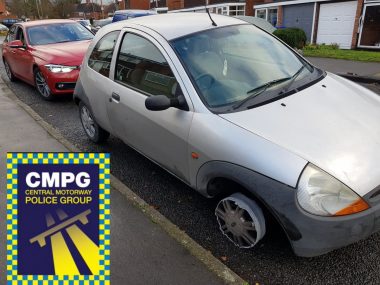 A 35-year-old man was arrested on suspicion of drink-driving and dangerous driving.

A CMPG spokesperson said: “Driving while under the influence of drink or drugs is a dangerous cocktail which can tragically cost lives.”