Traffic fears raised as Bromsgrove planners say they would give 1,300-home Perryfields development the green light

The application by Taylor Wimpey will see 1,300 properties, a 200-bed extra care home, five hectares of employment land and a mixed use centre of shops and community facilities created. Of the properties, 390 – 30 per cent – will be affordable homes, including shared ownership, rental and bungalows. There will also be ten units for self-build properties.

Because extra education provision will be needed, a new first school will be built at a cost of £2.5million and more than £900,000 will go to South Bromsgrove High School to increase secondary school capacity.

There will also be public open space, recreation areas, sports pitches and a pavilion.

After almost three-and-a-half hours of presentations, speeches and debate, the committee voted it through by seven votes to two, along with another proposal to demolish the Greyhound pub to turn it into a traffic island.

The development extends from the Holiday Inn on the Kidderminster Road in the north to the Stourbridge Road in the south and to the M5 to the west.

Because of its close proximity to the motorway, a strip of public open space and noise mitigation measures will be implemented to muffle the traffic sound for those living there.

On the above plan at the top of this page, the orange areas show where the housing – a mix of two and three-storey homes – will go, the purple blocks show the mixed use – retail and employment land, the green block is where the new first school will be and the yellow areas depict designated public open space.

The white squares at the top, just outside the yellow, show the sports pitches, play area and ecological habitats.

The developers will be contributing £5.7million towards a transport package which includes highways improvements, along with a two-bus-an-hour service linking this development, Whitford Road and the town centre and railway station. 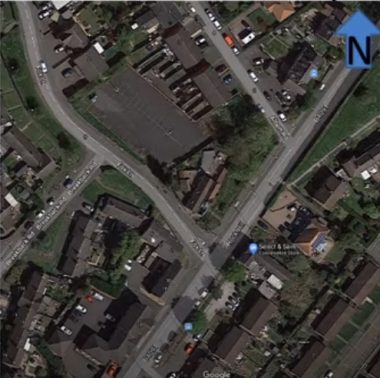 Speaking against the application, Coun Phil Baker from Catshill and Marlbrook Parish Council criticised the developers for not outlining the traffic impact on the  village. He accused highways officers of insufficient scrutiny, adding Catshill had been ‘overlooked and ignored’ and warned the village would become a rat run.

Alan Bales, from Whitford Vale Voice, said there had been a lack of due diligence, adding the traffic plan did not really offer adequate infrastructure, but more relied on changes in human behaviour – people ditching their cars in favour of cycling and walking.

He said there was a lack of figures with regard to how much extra traffic the development would generate and slammed the plan to close off Perryfield Road as a through route – as it is now – forcing vehicles through the development as a traffic-calming measure.

“The spine road will only direct cars towards the town centre.

“None of these solutions have been tested to show how they will mitigate the impact of the development.”

He warned journey times would increase – in some instances by three to five times what they were at the moment.

He slammed traffic consultants Mott MacDonald for claiming journey times in the future in the district overall would be less because of the improvements to the A38.

His concerns were issued by Coun Luke Mallett who reiterated calls for a ‘Western Distributor Road’ to take traffic away from the town centre, rather than pushing more vehicles towards it.

“If anything this is ‘anti-relief road’ – closing Perryfields Road reduces the number of through traffic roads we have from three to two.

“All of the infrastructure, like the A38, is on the one side of town and all the residential development is on the other.

“This will make an already bad situation worse.

“We all know we need housing, especially affordable homes, but not at any cost.”

He criticised the developers for the 30 per cent housing provision when the district council’s minimum requirement was 40 per cent.

It was claimed earlier in the meeting that this was acceptable because another nearby much-smaller development – operated by BDHT – was 100 per cent affordable housing.

Coun Mallett added: “Worcestershire County Council have the £5.7million in their eyes and are not interested in the information – they are supposed to be here to independently assess, not speak up for the developers.”

He also questioned claims that the town centre was in easy walking distance of the proposed Perryfields development.

“I don’t think two-and-a-half miles is considered walking distance by many people.

“In fact every other part of Bromsgrove is closer to the town centre and railway station than this one.”

Alan Cunningham, project manager from Taylor Wimpey, said the transport assessment had been worked on for years with both Worcestershire Highways and Mott MacDonald.

“There is a considerable focus on getting people out of cars – Perryfields is in a great location to achieve this.”

He pointed out the National Cycle Network passed through the development and onto the town centre and railway station.

He also pointed to other schemes, including bike hire, car clubs, e-bikes and e-scooters, which would be incorporated and said attitudes were changing post-pandemic and by many young people who were more climate change aware.

A steering group of Taylor Wimpey, Bromsgrove District Council and Worcestershire County Council would assess the transport plans and can add more elements as and when they were needed through a mobility, monitor and manage scheme for which an extra £705,000 had been allocated for.

He hailed the significant open space, wildlife corridors, sports pitches and places for play which would encourage more people to exercise and increase their activity.

“I hope we at Taylor Wimpey have demonstrated we are much more than a housebuilder – we have a genuine interest in the future of Perryfields and Bromsgrove.”

Time-wise, the first homes will be completed in two years time and 100 properties-a-year will be built after that until the scheme is complete.

The planning committee’s minded approval will be put forward to the Planning Inspectorate and considered as part of the evidence when a decision is made.

If fully agreed, building will start on the north of the site with the second phase in the south and a road will be maintained throughout the site while the homes are being built.